A sort of happy New Year as the random collection of individuals who form the FnCAG failed to meet in person, not, as some may think, to avert needless violence nor to avoid the sub-zero conditions of the December meeting. The group had made a decision not to have a physical meeting this month, to avoid assisting Mr Omicron in his bid for world domination. As a result, we reverted to a virtual meeting held by means of the technological magic called Zoom.

Hence it was was a virus-free and warm meeting for the fourteen chaps (for such they all are) who gathered round their computer screens on Saturday afternoon. So that was two Als, an Andy, one Chris, Graham, two James's, Martin, a Nigel, the far-flung Roy, Simon and Stephen. The more numerate among you will have realised that this list does not total 14, not even a baker's dozen, but only an ordinary mortal's dozen. That's because a special mention and warm welcome has been reserved for Ian and Mark, two new members of the Group, who joined us for the first time. Both of them are refugees from the tyranny of the N Gauge regime of wide checkrail gaps, narrow gauge and funny scale. (1:148! Really, what were they thinking? Could they not just have used the pre-existing logical scale of 1:152? After all, 6.5789477mm to the metre is surely easy enough for anyone to use? Was it all really Cyril's fault? Or was it, as some believe, a secret underground cabal meeting of The Coorse Scalers? Were there really secret N-gauge meetings in the gardens of a Downing Street residence? The questions are endless and really deserve a public inquiry, but The Establishment will never let that happen as names could be named and They can't let one of their Own be shamed. Source: Q-Anen)

Anyway, back in the real world, the subject on Saturday was "Carriages" or, if you prefer "Coaches". A number of folk gave small presentations with Jim being furst (to quote the Lanarkshire vernacular) to strut his stuff. He talked us through the construction of a Decent Models 45 foot Caledonian carriage which he had had lying about for some time, but had been spurred into action by the death of John Boyle, the originator of the etch. It ended up looking like this:

Rather nice, you'll agree. And here it is in a train on his layout, including some earlier builds of other carriage diagrams.

Jim has written up the build on RMWeb at https://www.rmweb.co.uk/community/index.php?/topic/154447-in-memory-of-john-boyle/

Next up was Roy, who has a large number of various Masterclass Models kits to make up. These were produced by Chris Higgs as limited edition etches, and Roy built up a stock of about 30 kits which he has slowly been working his way through, although this massive programme of carriage construction has been disrupted by Roy's work on Dunallander. He showed the starting point of a particular kit: 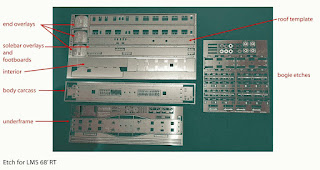 Followed, after an explanation of the build, by some completed and partially completed items 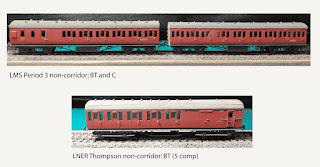 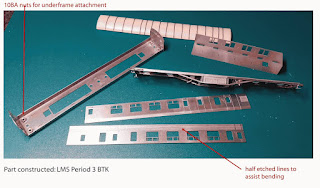 Roy has also been building some Worsley Works carriages and finding them, although not so complete at the Masterclass etches (as you'd expect in something which is sold as a scratchbuilder's aid), certainly very useful, although, in the example he showed, there had been an error in the bogie spacing - easily corrected.

All good stuff and, when finished, will give Roy a fine collection of various rakes of coaches, well removed from what can be done using proprietary stock (which, of course, would be in the wrong scale anyway...)

Although, of late, Nigel has not been doing much in the way of carriage building, he showed us some North London vehicles which he had built in the past from some David Eveleigh etches. He showed us some construction photos including this one demonstrating the noble art of soldering the roof onto the sides. This method of construction has its strengths in getting rid of the difficult to hide the joint between the roof and sides rather than the usual method of construction with the body soldered to the floor pan or underframe. 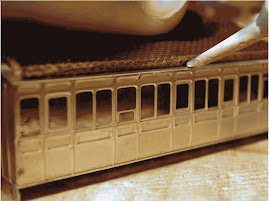 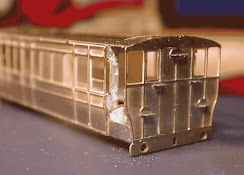 Martin, as a beginner, recited his experience with his build of another Masterclass etch, for a BR Mk1 coach. He had had some difficulty with making the etched bogies which rely on getting the axleboxes to align on the bogie by using the bearings to line them up. This works well for the first couple of etches but gives problems on the outer etches as the bearings aren't long enough, causing difficulty in keeping those bits of etch aligned when soldering. Nigel pointed out that it is easier if you have resistance soldering iron, as you can keep the iron on the job after turning off the current, until the solder has cooled. (Once again, your scribe yearns for such a beast to help with his extremely untidy soldering.)

Martin was also having some issues with ill fitting parts on the underframe and keeping things perpendicular. All the same, he is making progress as photos of the body show. 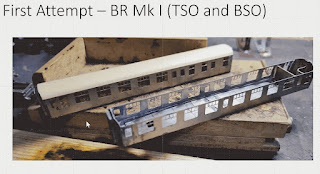 Martin is also having a go at a Worseley Works 45 foot Caley carriage. 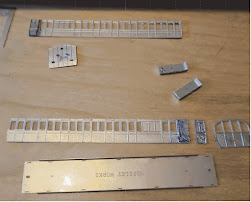 Martin's talk led on to general discussion of cleaning up before and after soldering, with fibreglass brushes being recognised as a last resort, given the difficulty in getting rid of short bits of fibre. The use of a Garriflex brown block being good for cleaning up a large surface. Using Cif (other cream cleansers are available) and a toothbrush under running water was accepted as being a good way forward. Just remember to put the plug in first and wash your partner's toothbrush afterwards. Another good alternative is use of a jewellery cleaner dip solution.  Best way might be the use of a cheap ultrasonic jewellery cleaner, using just water. Pop your manky metal in the cleaner after every modelling session and after drying it will be nice and shiny for your next session.

Alisdair showed a number of pictures of various carriages he has built over the years including this one of three Highland Railway passenger brake vans.

From left to right; a Bill Bedford etch with Association bogies, the same Bill Bedford etch cut down appropriately with a hand-knitted 6-wheel underframe and a 4-wheel van from a nice little etch produced by The Editor of the 2mmSA Journal - All hail to Anthony!

Well that was it. Disappointing not to have met in person, but Zoom has its strong points for doing presentations and it does let our far-flung members attend more often than they would otherwise.

Next month's meeting, on 12th February, may, or may not, be physical. We'll have to see.