Picture it, a dreich, dark afternoon in the post-industrial wastelands of West Lothian; lowsing time for a bunch of dishevelled chaps, blue with cold, haggard with overwork and with the light of the joy of life dulling from their eyes, trudging out of the 2mm Scale Association Turnout Strip Sweatshop which had been temporarily set up in the meeting rooms of the Edinburgh Society of Model Engineers. Yes, it had been the Forth and Clyde Area Group's introduction to the harsh reality of the production of those nice shiny bits of copper-clad which emanate from the Association's Shop 1.

Eight doughty individuals made their way to the meeting place on Saturday, little realising the  "pleasures" in store. As well as Overseer Nigel, the labour consisted of the usual 3 Als, only one Jim, Graham, Stephen and, for the first time in his physical manifestation, Martin, who had previously managed to attend a number of Zoom sessions, but that nasty four-letter word, work, had prevented attendance in person before.

Given the current concerns over the Covid Omicron variant and the recent Scottish Government guidance, we were all wearing masks whilst circulating in the meeting room, and windows were kept open to assist in prevent the blood from circulating in the once warm humans in the room.

Anyway, as you may have gathered from the foregoing, The Area Group has taken on the mantle of producing copper clad sleepers and turnout strips for the Association, under the direction and guidance of Nigel. Our first session was to produce a batches of 50 turnout strips. Nigel had brought along a guillotine and the patented Blackburn Sleeper Chopper Machine; marvellous in its ingenuity and powered by a motor sufficient to dim the lights throughout West Lothian when starting. Nigel took a couple of victims willing volunteers to show them the ropes. It turned out to be really quite simple in the end, and very few fingers were sacrificed to the Sleeper Chopper Machine (SCM). Here we have the Nigel guillotining the sheets down to size to fit the SCM, Jim on the SCM itself and, hiding at the back, Stephen on Quality Control, weeding out those bits which did not come up to scratch. 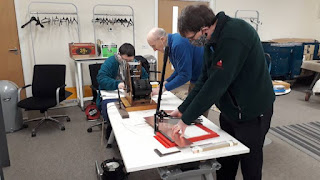 The other part of the operation involved Martin counting and Alastair bagging the strips. There is a set of scales behind the detergent box which was used to avoid counting every strip. However, the battery ran out part way through the session, probably discouraged by the temperature in the room, resulting in resort to counting, which did give problems to one of the more arithmetically challenged amongst our number. (That's why he was taking this photo.) 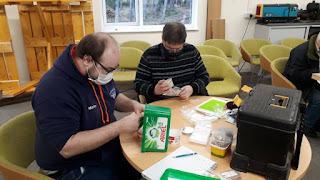 The scales weren't the only thing affected by temperature. After a while, the reject rate of strips became much higher. It was decided that this was probably due to the brittle behaviour of the material in low temperatures, so the operation was abandoned. However, we had produced a goodly number of bags and had proven that we could churn the beasties out in fairly quick time, providing enough people were present to create an efficient production line. Perhaps we'll have to limit our production sessions to warmer days, at least until opening of windows is no longer required in the battle against Covid.

Our former Press Officer, Graham, has produced a wee video of the process:

As not everybody could be employed on the production line, folk had brought along their own projects to work on. Graham was producing etched chairs using the doofer demonstrated by James at a previous meeting. He has had much more success with that than the "official" way by using the 3D thingummy available from Shop 1. Yet again, a case of finding what works for you. 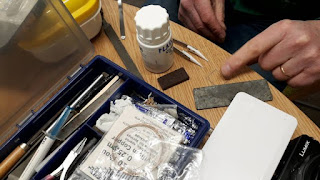 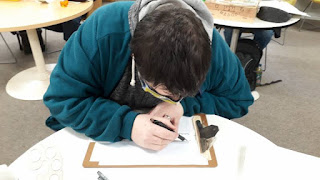 New boy, Martin, had brought along his first 2mm model, a scratchbuilt Caledonian Railway outside framed covered van. An excellent start, particularly on what is not exactly an easy prototype. He was busy creating another on the day. Masochism clearly runs deep in his psyche. 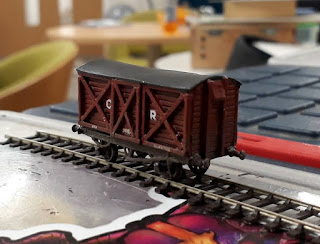 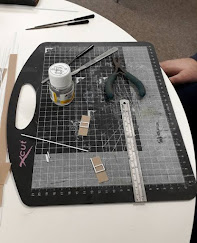 Alistair ("i" and "t") was beginning to cut out the walls for his farm building. It's his first essay into using styrene sheet, having been previously a user of mashed and flattened dead trees, and he was tentatively picking up the differing techniques necessary. 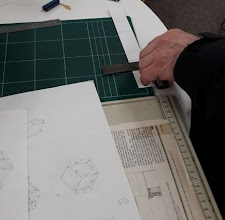 Alastair ("a" and "t" this time) was also doing some builderwork, knocking together a wee Ratio hut for his embryonic South Queensferry layout. It's building into a nice wee model. 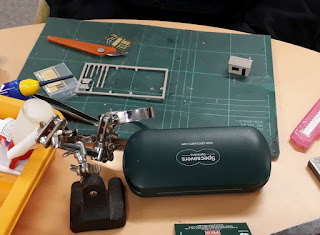 And the third of the Als (with an "i" and a "d") was wielding his piercing saw on his slow voyage towards the depiction of an exNBR C15 4-4-2T. The class 37 in the background definitely had a Not to be Moved sign, so he was unlikely to get run over. 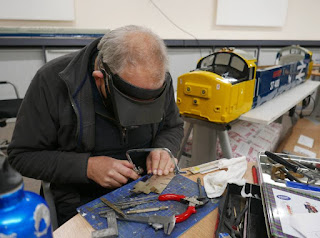 Over in the far cornet , Jim was churning out another 7ton Caley mineral wagon, made from his own Buchanan Kits etch. "How many is that now, Jim?" "Never enough. Can always do with another one or two. Now be off with you and your impertinent questions!"

The first line of the above paragraph contains a typo; Jim was not working inside a brass wind instrument, but was working in a corner. Sincere and humble apologies from the author to any who may have been misled. 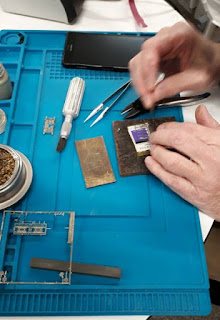 Nigel was finding the cold all too much... We had to point out that lying in front of the 37, was not going to result in a swift release from all woes. 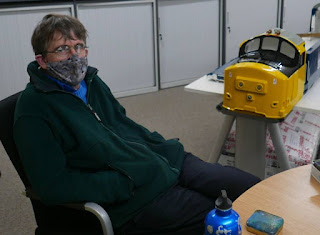 And so, that was the last meeting of 2021. Given the situation, it might be our last physical meeting for a while, but we'll have to wait and see. Our next meeting, on Saturday 8th January 2022, will have a Zoom session anyway, which may be all we have. Ah, well.

Best wishes for Christmas to all our dedicated readers.