This month's theme was the project you'd love to build but (probably) never will. It prompted some interesting discussion. Andy took us through his past project of Leslie and future plans for Aberdour. Jim gave us a look at Airdrie's railways in maps, pictures and scale drawings: at one point he made serious plans to model the Caledonian terminus there but eventually concluded he'd be better doing something simpler ... so built Connerburn and now Kirkallanmuir instead.

Richard talked about the monumental coal staithes at Albert Edward Dock on the Tyne, and backed it up with some excellent photographs. Tony showed us his part-completed Hest Bank project, which he stores in sections until the day when he has a 13-metre-long shed, or converted farm steading maybe, available to house it. There were beguiling photos of 12-coach trains dwarfed by the baseboards in the sections completed so far. (Remember, this is the man with nine Black Five tenders!)  His comment was "Even if I spend my time not getting there, at least I'm content on the way", which perhaps summed up everyone's feelings about their pet projects. We spent quite a while discussing ways of lightening baseboards, and the timeless dilemma of whether to scrap and rebuild once lessons have been learned, or to soldier on and persevere with what's been achieved so far.

Alisdair gave a a civil engineer's perspective of the Findhorn viaduct on the Highland Railway's cutoff line from Aviemore to Inverness, backed up by a series of archive photographs, and discussed the possiblities of a roundy-roundy based on the viaduct and a simple passing-loop station on the lines of Moy or Tomatin. Graham gave a quick glimpse of three locations with potential: Clydebank Dock West Junction near Glasgow; Stannergate near Dundee: and St Ives in Cornwall.

Alastair showed us his current research into lightweight baseboards: foamboard skin separated by 3D-printed spacers along the trackbed, each with prongs to engage the foamboard and held by double-sided tape.Here's one of the blocks: 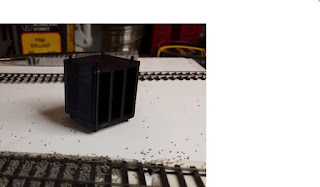 All very innovative. The difficulties of cutting foamboard neatly was raised by the audience. Alastair recommended the Logan Foamwerks series of tools, which do indeed look interesting.

We then turned to the familiar subject of our next group project ... some time was spent going over old ground but eventually we made some further progress. The tandem point, rejected in the most recent iteration of the track plan for being too hard to model due to a very short central crossing (the formation was two right-hand diverging, 1 in 5 turnouts), was resurrected in simpler form; we realised a raised coaling bench is unprototypically large for a  two- or three-road shed, which in turn meant we can simplify that part of the layout; and we discussed how we might push the project ahead even if a tighter lockdown lies ahead through the winter, as now seems inevitable, by dint of less-experienced members having a bash at making individual items (turnouts, buildings, etc) for the layout, and the more experienced members acting as mentors and applying strict quality control so that reliability is not compromised, a lesson learned from Sauchenford.

So, a briefer update than usual, but the meeting itself lasted for over three hours and was full of interest. The virtual format allows us to involve members who live too far from the central belt to attend physical meetings, and we hope we'll retain this even when (if!) we return to physical meetings in the future. Our next meeting will be virtual again, on October 10th, and will hopefully be a tutorial session. As a reminder, any 2mmSA member living in Scotland (or simply with an interest in what we're doing) is very welcome to attend - simply contact Alisdair Campbell to receive the regular invitation mails - his e-mail address and telephone number are in the newsletter in the "Area Group Contacts" section.