A rather reduced number of FCAG regulars made their way to Almondell on Saturday, to celebrate getting back to physical meetings again after the virtual meeting of January. So this was the first proper meeting of 2022. Hopefully the pandemic is really on the wane, and we won't have to revert to Zoom only meetings again.

Only seven attendees this month, with a few regulars being unable to attend for a number of reasons. However, The Three Als, Chris, Chris, Graham, James (bereft and pining for the other J.) and Stephen took their socially distanced places at scattered tables in the ESME meeting rooms. Much to everybody's relief, Al#3 had arranged for the heating to be on, thereby avoiding the near-death cold experience of the December meeting.

The Area Organiser, in his vast and boundless wisdom(?), had high-handedly decided that we would only have demonstrations every second month as his extensive neuron network is far too important to be wasted on such trivialities as dreaming up a subject. As a result, everybody had been forewarned to arrive with a project. And everybody did. But not much projecting was done, as blethering reached a new peak, even for the FCAG. A wide range of subjects was covered, such as what exactly is the enjoyment in playing rugby, prohibition of the teaching of technical subjects and the forcing of dead language learning on the unwilling. Occasionally, the subject matter would stray to railways, but not long before it would be headed off again in another abstruse direction. However, on a near miss, conversation did hover over the subject of machine tools for a good long while. Unfortunately, by that time the Mad Machine Tool Man had left to watch a rugby match or two on his televisual apparatus, before retiring to his basement to caress his wide range of tame machine tools and whisper sweet nothings into their belt wheels.

Just before he left, your scribe, rather belatedly, snapped a picture of the result of Graham's work as it was being stashed away. In case you can't work it out, it's a rake of crossing timbers duly cut to the appropriate length, gapped and filled with green filler. 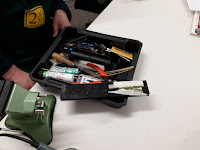 You have to admire the dress sense of a chap who wears his best togs to a Group meet. No other attendee could match his dapper appearance.

In a reversion to the days of stagecoach travel, Graham was charging first class fares for an inside seat of his horseless carriage, so Al#1 held back until the car was leaving the car park to dreep down from an overhanging tree branch onto the roof rack for a lift home. That's my recollection anyway. Other versions may differ. Before he ganged awa' he had been showing us various photos in various books which may prove inspiration for the Group layout (if it ever gets inspired). 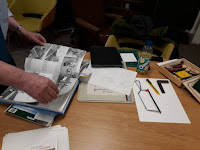 Chris, in the meantime, was ignoring the undignified scramble to the door by his near-neighbours, preferring the company of the more dedicated individuals who remained staunchly at their respective tables houking away at their respective 2mm coal faces. In Chris' case, this was doing something for his well-advanced Raithby 4F which involved a vernier, a book and a computer. I think the poor chap was working out what he needed to do to create a master for moulds for the tender axleboxes. 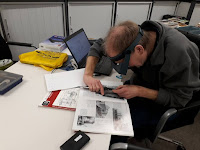 Meanwhile, Al#3 was threading rail through Easitrac sleepers in preparation for installation on his wee layout based on South Queensferry. His task was much eased by James providing him with his hand-knitted jig for carrying this out. His baseboard, using an Ikea* shelf can be seen in the photograph. 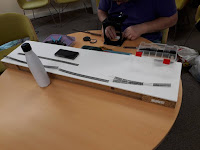 *Other furniture makes are available.

Meanwhile, Stephen was beavering away on creating a revised layout to fit his railway room having realised that he could make a much better space by knocking down a wall. (Apparently he managed to source some skyhooks on Ebay which will be very useful to prevent the master bedroom becoming entangled with the railway.) 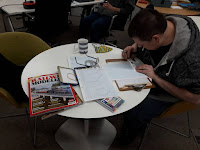 The RM in the foreground is evidence of Stephen's generous provision of a railway magazine reading room service to the assorted bods of the group. He must spend a lot of time browsing station bookstalls to save us the bother.

Now, time for a confession of the gravest order. You will be shocked to read that your correspondent who has been trusted with the sacred task of presenting the activities of our Area Group to The Outside World, has let the nobility down. He committed the crime of failing to take notes or photos of Al#2 and James efforts because he was talking too much. Sentence will be handed down from on high. Perhaps he will released form his duties and banned from doing so. We live in hope.

The next Group meeting will be Saturday 12th March.

We will be taking the 2mm Association Roadshow to the Model Rail Scotland exhibition (also known as Weegie Rail) at the Scottish Exhibition Centre in Glasgow on the 25th, 26th & 27th of February. Our first exhibition since the same event in 2020. Hopefully we will meet some of you there.

If you are coming, please note the SEC restrictions due to Covid. They can be found here: