Once again we had an Edinburgh session, with six of us round the table. A fair bit of nattering to start with, since Stephen had brought pictures from a recent trip South (Wigan and Manchester shows). Meanwhile Jim installed a second group of his ground signals on Sauchenford with the help of a craft knife and a 1/8" chisel, and after reclaiming his Kindle, Stephen started filing the point rails for a turnout. 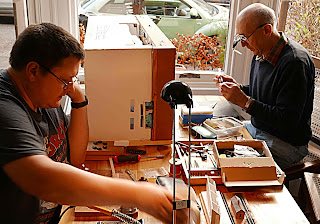 Jim had also brought along his FCAG Challenge diorama for inspection. It now has track laid and the weighbridge table in place. Just as well for the rest of us that it's not a competition! 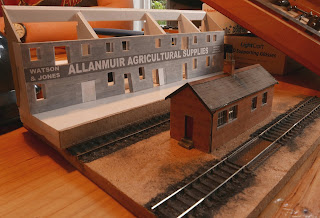 Alisdair continued work on the styrene sheet platelayer's kit he started last month, adding brick paper and a whitemetal "granny" on the chimney. A pile of sleepers and a pair of ballast bins were also conjured up from black styrene. Quite a satisfying group.

Alistair did a bit of painting, Andy caught up on his reading (his excuse was the need to recover after his recent '"flitting" from Mid to East Lothian), and I struggled on with my Catfish kit - successfully executing the bit marked "fiddly" in Stephen Harris's instructions, much to my satisfaction.

As the light faded, mince pies caused a general downing of soldering irons: Jim's satisfaction at installing his second set of working ground signals was only slightly dented when Alisdair found the first set by treading on them. Alisdair's mass is about 16,000 times that of the ground signals, even without the mince pie, so the contest was uneven. All was not lost however: "I didn't put my full weight on them", he explained helpfully. Stupid boy! said the bubble above Jim's head.  The poor wee ground signals will spend Christmas in hospital as a result. But we parted friends.
Posted by tin whistle at 00:03:00 2 comments: