A number of the regular Forth & Clyde crew were unavailable for our October get-together, leaving Alisdair, Jim, Gordon and Graham a bit more space to work than usual.

Jim had brought along his recently-completed lever frames for signal operation, which he proceeded to install with Gordon assisting. 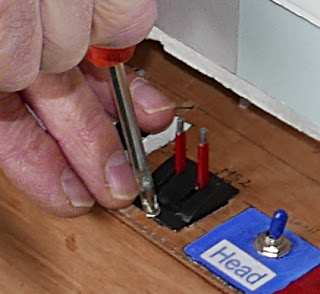 The link to the operating mechanism is by wire-in-tube. Jim's practice is to secure the PTFE tubes using ordinary office staples, bent to accommodate the tube so that it is held firmly without pinching, then carefully driven into the underside of the ply baseboard by gripping firmly with pliers and pressing home. As long as the staple goes in cleanly and the force is perpendicular to the ply, it does not buckle, otherwise it's best to start again with a new staple. 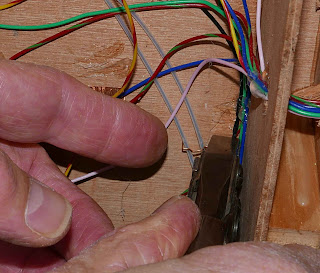 Fortified by bacon rolls, slabs of cake and mugs of tea, the job was finally completed with all signals operating smoothly from the lever frame, yet easily removed from the layout to avoid damage in transit. 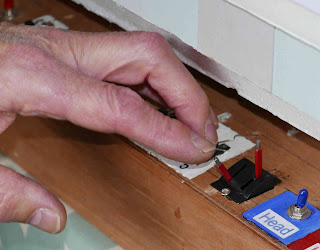 Here they are in motion.

The enlargements are cruel: the signals are only 5mm high. (On Stevens ground signals, the flap drops forward to show a "proceed" aspect).

Alisdair was showing off the servo point motor wiring he's been busy installing on his shunting plank. Or maybe it's a telephone exchange. Anyway there is plenty of wire involved. 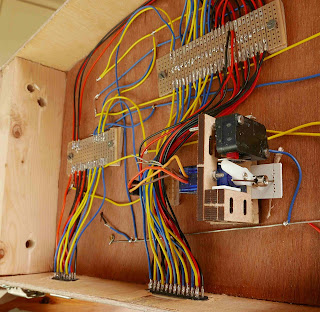 Apart from helping to eat the cake, I was able to do a bit more on my Harris Catfish kit, and we all discussed our ideas for the Forth and Clyde 2016 Challenge diorama. Roy from the Grampian group dropped in late on to pick up the 2mm SA Scottish Roadshow ready for the Aberdeen MRC show at the end of this month. And that was it: another meeting over and Sauchenford is a wee bit more complete.
Posted by tin whistle at 01:22:00 No comments: