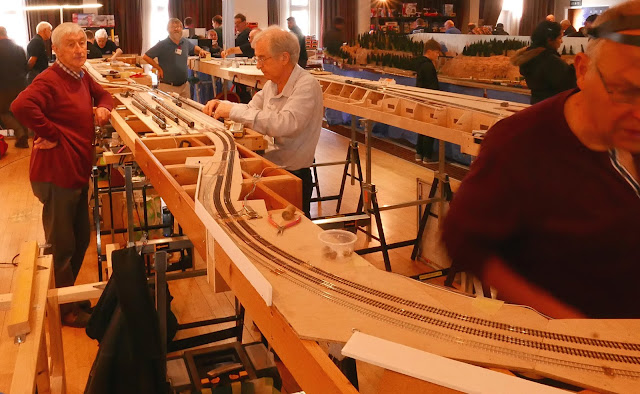 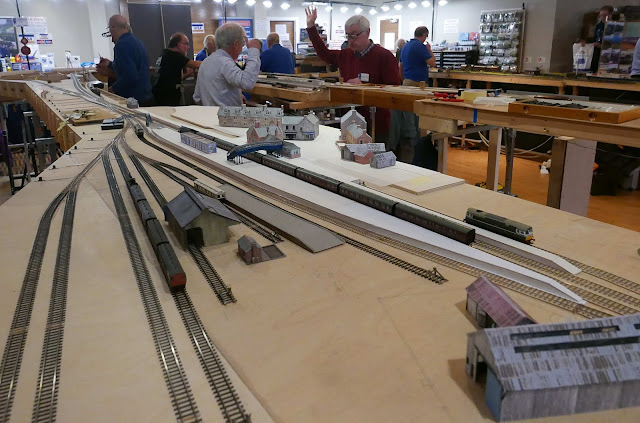 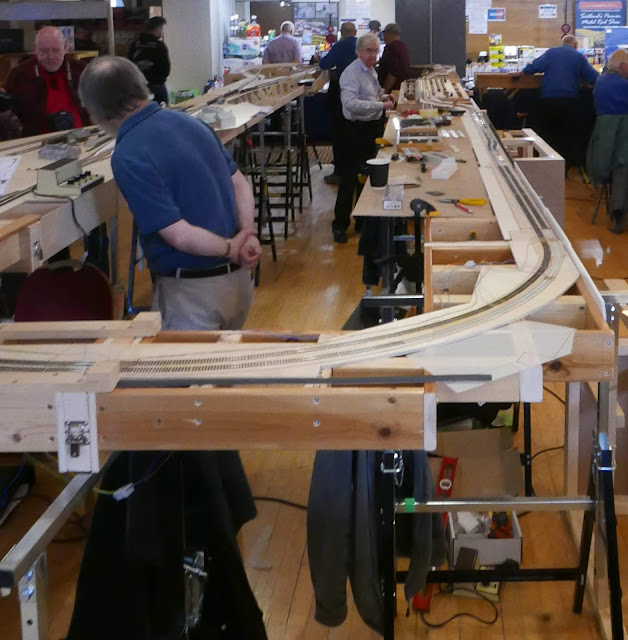 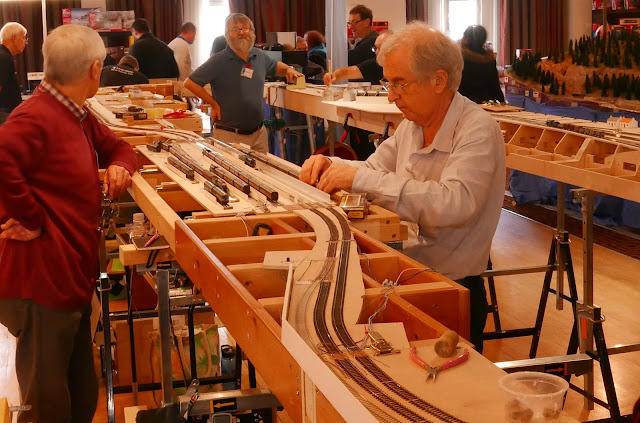 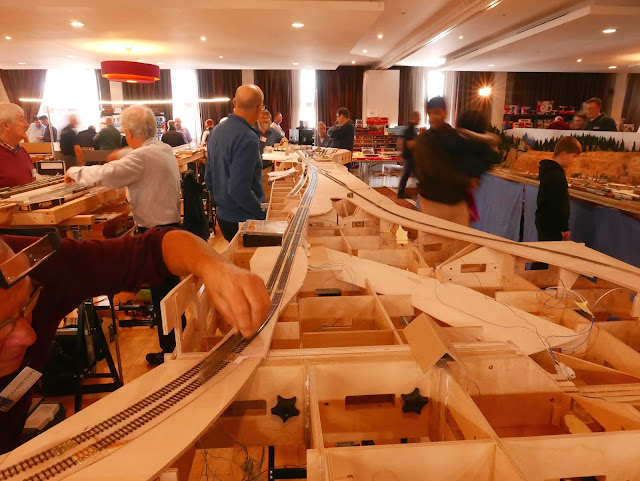 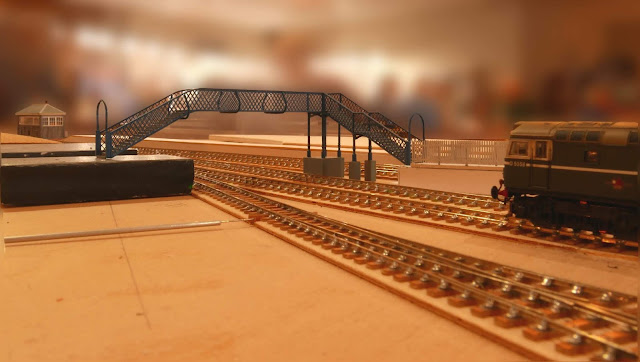 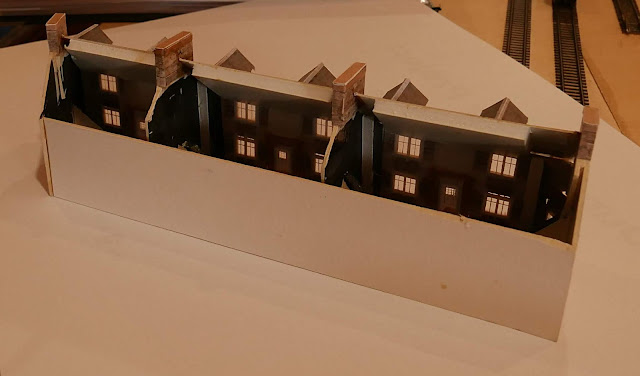 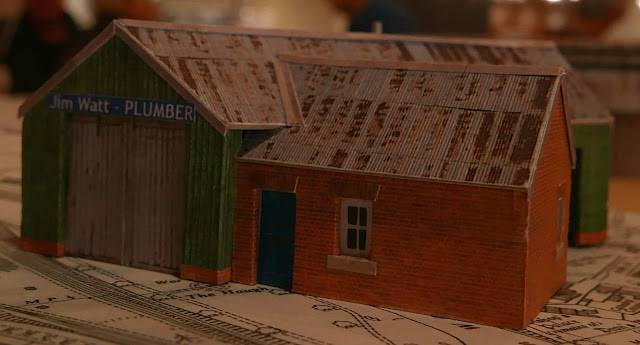 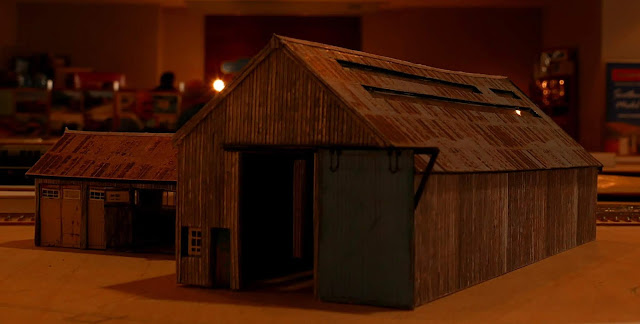 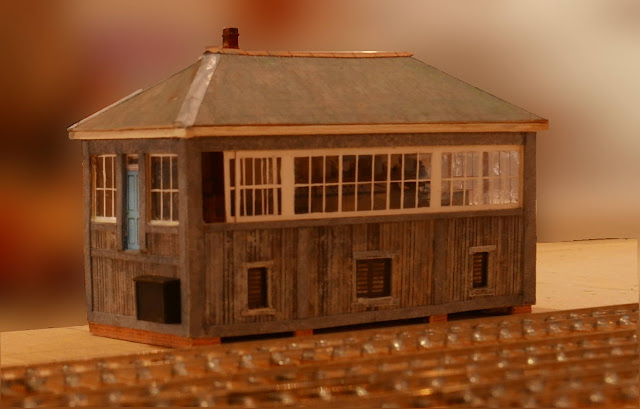 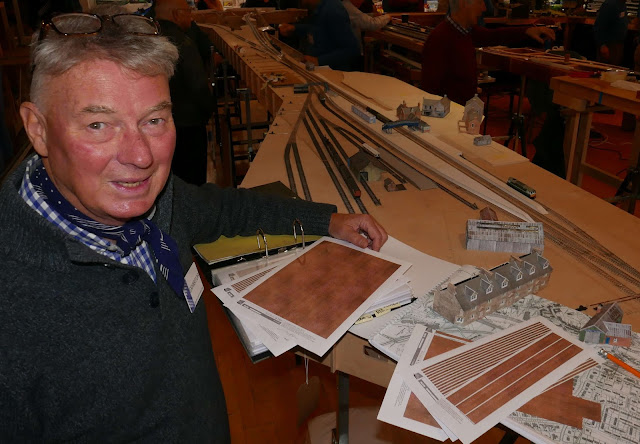 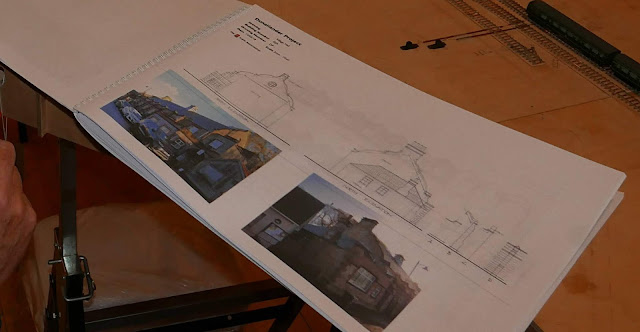 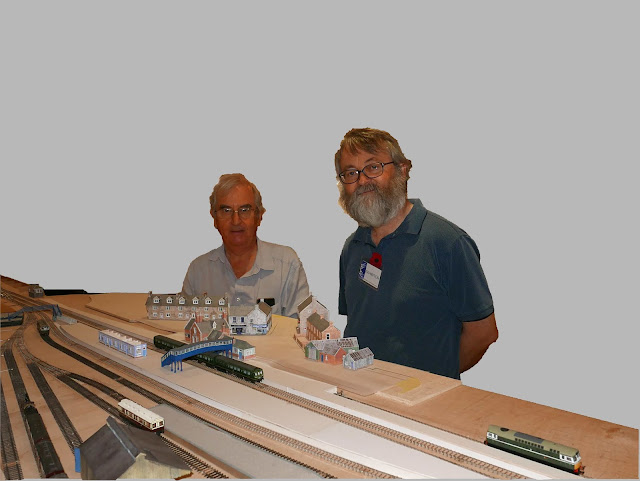 There was a good turn-out of FCAG members for this month's meeting: Andy, Jim, Stephen, Alistair, Alisdair, Nigel and Chris met at Graham's house in Edinburgh. The objective was to continue testing Sauchenford's fiddle-yard cassettes in an attempt to get derailment-free entry and exit, something which has so far eluded us.

The layout support is intended to be assembled by two people in a few minutes. Instead, we tried to assemble it with six people, as a result of which it took more like half an hour to erect. 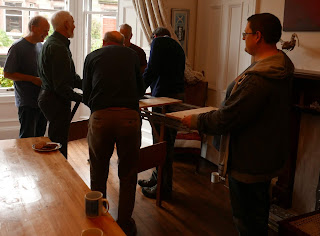 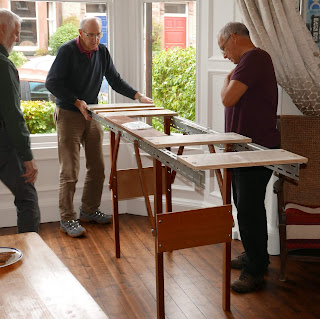 Once erected it was found not to be level. Alisdair took charge, since he is now a one-day-a-week PW surfaceman on the local Bo'ness and Kinneil preserved railway ... plus, he is bigger than most of the rest of us. A spirit level was deployed, inconclusively. Attempts were made to blame the floor. 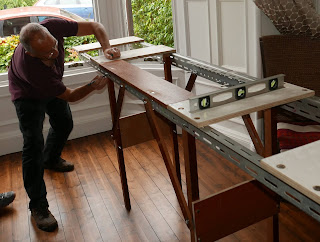 Finally he demanded a length of string and showed us how to detect a humpy-backed board using three rods of identical diameter. 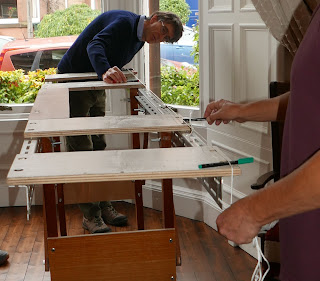 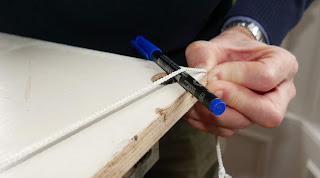 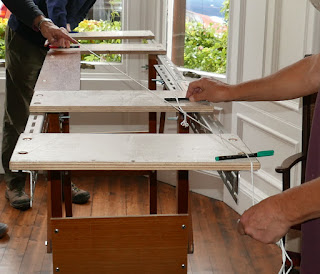 The conclusion was that it did not matter too much if the base was level, since it would be necessary to pack up the layout boards anyway.

The Short Talk this month was from Nigel, who told us about his recent experiments towards producing an simple, low-cost sound system for the "Burntisland" P4 layout of the Scalefour East of Scotland group. 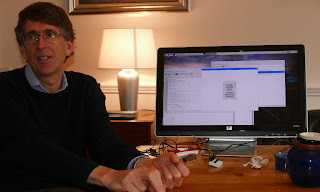 The idea is to use a Raspberry Pi (or Arduino or similar single-board computer) to play a range of sound clips. The requirement for Burntisland is to create the ambient noise of a nineteenth-century ferry port with train occasionally passing through the scene. The script Nigel has written for the Pi can play eight sound clips simultaneously from an arbitrarily-large selection. First of all a 20-minute-long seaside sound background is played in a loop (the length avoids any impression of repeated sounds). Seagull noises are also played in a loop, but faded up and down  to simulate approaching and retreating birds. Other noises can be triggered by push buttons (for example, the ferry's siren, or rattling chains for the linkspan) or by reed-switch or optical sensors. On Burntisland, the sequence of trains leaving the fiddle yard is known, so the software allows appropriate sound clips to be ready in the correct sequence and then started as the train enters the viewing part of the layout. 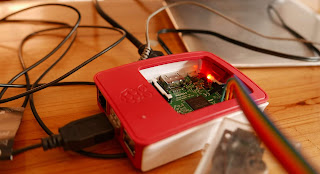 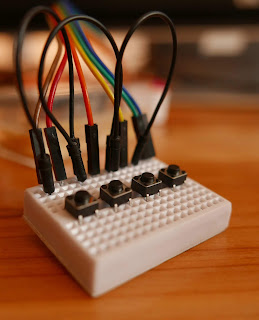 The point of the system is its minimal cost (just £30 for the Pi, with a mobile phone as a command console or a £50 touchscreen for the luxury version, plus wire, push-buttons and speakers; and further cost reduction may be possible once development is complete using an embedded-application device like the PiZero, at one-tenth the cost). It avoids the cost, complexity and difficulty of retrofitting DCC sound to scratch-built models and handles train and non-railway sounds equally well. It allows soft menu selection from the touchscreen when this is advantageous (cueing up a series of trains from a list) but permits fast selection by physical button when timing is critical (synchronising sound with on-scene actions). All in all a most interesting idea which adds further realism to finescale models.

As we consumed soup and bacon rolls, Jim showed us the current state of his Jubilee Pug project: 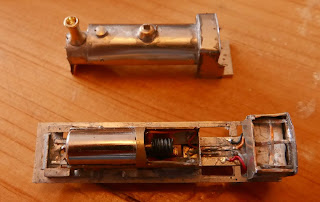 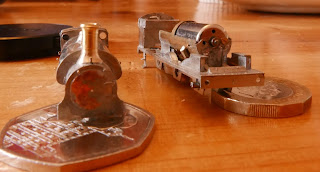 Further details are on RMWeb. The stainless-steel 3D printed wheels are still under development but the machining operations required to finish them have more or less been agreed.

Chris has made progress with his 4F chassis and  had also brought along his first 2mm point for us to admire.

The rest of the meeting was spent adjusting fiddle-yard cassettes. Several were passed for for service and several others were condemned and will be reduced to their component parts for possible reuse. The cassette system on Sauchenford seems to have caused problems well out of proportion to its complexity. What we have learned is that careful storage is necessary to avoid damage to fiddle yard track and cassettes alike, and that none of the three or more designs we have tried to connect power reliably to the cassette is satisfactory. Aluminium angle is a nice material for structural use but not so good for reliable pickup. On the other hand, a cassette system combined with a swear-box would be an excellent way of financing a layout.

Next month's meeting will, we hope, be in Glasgow, and will continue the theme of testing and fettling.
Posted by tin whistle at 18:27:00 1 comment: