On 4th September, the ESME Pleasure Palace was, once again, graced by the august presence of some gentlemen of the Forth and Clyde Area Group of that splendid organisation, the 2mm Scale Association. (Of course, all that goes to show is that they were behind the times as usual, as it wasn't august any more.)

As last month, the Group mustered to the strength of two-thirds of a dozen. Those stern individualists; Stephen, Graham and Nigel, were joined by a happy pair of Jameses (including the one commonly known as Jim) and the Al triplets, absolutely identical apart from their looks, voices and names. Later in the day, during the bi-monthly Zoom session, they were joined by the magic of the ether by the loon, Tony from Furryboots City.

After the usual chinwagging and setting the world to rights (calling to mind that phrase - Wha's like us? : d**n few and they're a' deid!) there was a move to populate the socially distanced tables with modelling tools and bits of the scalpel artists' latest creations. J#1 showed us his latest creations; a Caledonian Railway goods shed pretty well finished along with a stable block and minor offices at an advanced stage of construction.

Meanwhile, J#2 was busying himself with preparing some etched chairs for incorporation into a turnout. Here is his portable work tray showing some already prepared in the plastic box along with their originating etched. He is using the 3D printed doofer available from the Association shop for that very purpose. The aforesaid turnout was also making an appearance.

Nigel was busying himself with creating another low relief building for his layout. An action shot shows him marking up the plastic before cutting out.

Graham and Al#3 were continuing to work on the turnouts that they had brought along to the August meeting, teaching all the rest of us some new epithets which we had never heard applied to pieces of trackwork before. Al#2 was pretending he was making a facing lock and detector bar cover by randomly cutting up wee bits of black plastic whilst Al#1 was starting to mark out his planned barn. He was using very heavy duty water colour paper which the assembled troops agreed would make a nice finish for a harled wall without further texturing. All the while, Stephen had his head buried in books seeking inspiration for recovery from a recent downturn in modelling mojo.

Following our individual delicious repasts, the Zoom session started, when we were joined by the Aberdonian loon, Tony . The chosen topic for the session was “The Undergubbins of Wee Locomotive Engines”. Translating from the wording emanating from the strange imaginary world inhabited by the Area Organiser ("Sir" to his friends, which is why he doesn't have any) this meant locomotive chassis.
J#1 started it off with a well prepared presentation showing his developing techniques over the years constructing models of Caledonian Railway locos. His approach has been to incorporate compensated wheelsets, not for track holding, but to maximise the points of contact for electrical conductivity and to keep gears and gear shaft out of cabs where at all possible. The first photo shows the layout of a 2-4-0 loco with the photo of the hand-knitted components for the loco chassis beside it. Since then, he has moved on to drawing his own etches and the third photo shows the chassis for an 0-6-0T made up from such an etch.

The 0-6-0T chassis shows the slots required in the outer frame to allow the wheels held in the inner compensation beams to move vertically.
Jim has recently been installing stay-alive units in his locos and says that in future he will probably eschew the use of compensation, given the great improvement in running brought about by the use of the stay-alives. However, he will continue to use split coupling rods in his 6-wheel chassis as he is of the opinion that we can only get reasonable running by introducing (controlled) "slop" into chassis. There was much nodding of heads in agreement with this sentiment.
After the professional presentation by J#1, Al#2 showed some random photos demonstrating some of his techniques. The picture on the left shows his use of extended frames with Association spacers to maintain frame position on the chassis of a 4-4-0T. The extended frames are removed once the frames are fixed satisfactorily. This was learnt from the building the Association Black Five kit which uses the same techniques, albeit on 0.25mm etched frames rather than the 0.6mm brass used on the 4-4-0T. The second photo shows the use of small lengths of PCB glued to the motor to act as solder pads. This meant the wires feeding the motor can be kept in place without the danger of movement eventually breaking the wire. Further pads were added later to allow the fitting of a stay-alive whose components (just) fit in the frames between the axles.

Nigel had brought along a couple of very small diesel shunters which he had constructed back at the beginning of the century.

The black DY1 on the right had had a chassis constructed without the use of machine tools with the exception of a mini-drill on a couple of occasions, just to prove it could be done. He had fully written the technique up in the Association magazine of October 2003, but he gave a brief resume at the meeting. He had used fully geared wheels, avoiding the use of coupling rods (just like the real thing, I presume). The outside frames were of pcb with appropriate breaks in the copper to provide the requisite insulation, and frame spacers of solid brass carved with files and all screwed together. The photos below (taken from the article) clearly demonstrate the technique. The heavy brass lumps give the loco good hauling power and pick-up for such a diminutive little beastie

Last up was tidings from our North-east correspondent, Tony who has been working his way through a Mike Raithby 8F. (Apparently, he had been told that this would be easier than a Raithby 4F; there's obviously someone with a warped sense of humour out there.) He is using this as a practice before building the bodies of his 9 (that's right - nine) Association Black 5 kits. He has made a good start with the body, with the fancy curves of the Belpaire firebox and the tapered boiler and has started on the chassis.

Tony also has the nasty habit of chasing visiting kettles around the countryside and photographing them. He showed a really nice snap of Tornado on the Ferryden viaduct at Montrose. Inspiration indeed.

The Zoom session closed down and people started to drift off home. And that was that. Or was it? Those with staying power were rewarded by Al#3 organising a wee trip on a 7.25" gauge train. Here's the merry band boarding the 1637 from Here to Back Where They Started under the watchful eye of aforesaid Al#3. 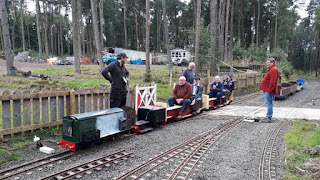 Heeding solemn warnings not to lean out, the stalwarts duly wheeched twice round a roundy-roundy on the ESME pleasure grounds. Tunnel, gradients and stations. And the scenery was really realistic. Great stuff! Unfortunately the name of the part owner and driver was not recorded but he was very welcoming of questions, from which we found that the use of 3D printing for detailing is used on big trains too.

Next meeting on Saturday 9th October. No Zoom session this time.