For a change this month we replaced our usual meeting with an outing to the Chris Kedgeley memorial Skills Day event organised jointly by the Scalefour and EM gauge societies, which took place this year in Linlithgow. Although the scale was 4mm rather than 2mm, there were plenty of interesting techniques to learn from, and some nice modelling to look at.

There were a few demonstrators with a 2mm connection as well. Nigel Cliffe was explaining stay-alive capacitors. He has previously explained these to the FCAG at our June 2017 meeting, as well as in his own blog: 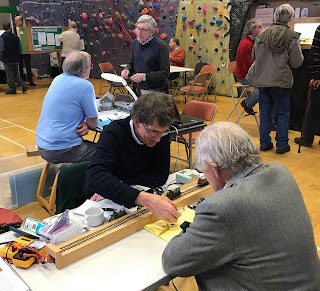 Behind him at the other table can be seen Ian Lister, demonstrating how to create realistic stonework using Polycell Advanced Polyfilla, which he selected after trying 6 or 7 different products, since it has just the right amount of flexibility to take detail without flaking or clogging when scribed. Ian builds walls with this stuff by coating 30 thou plasticard with a 50/50 PVA/water solution then spreading on a thin, even coat of the Polyfilla with a steel artist's spatula. The PVA helps it bond. The mix is spread over the edges and left for 24 hours to set, then the edges are trimmed. Scribing is with a blunted point such as that from a compass (the kind you draw circles with, not the orienteering sort) held in a pin chuck. Patterns such as granite setts (cobblestones) can be gently pressed in using a tool made from brass channel. An old electric toothbrush makes a good orbital sander, used gently to remove crumbly edges and give a slight key before painting. Scrapings from artist's  greytone pastels are used to weather the painted walls, and very effective the finished result looked ... so much so that I forgot to take any photos, so you will have take my word for it. Ian modelled in 2FS for a while, writing up his achievements on RMWeb, before moving up to EM after his 2mm layout sadly did not survive a few years' loft storage. It was good to hear about his techniques at first hand.

Another thing I liked was John Stocks' sliding/rotating fiddle yard design. I first came across this on the Scalefour West of Scotland group's layout, "Calderside", at the 2015 Glasgow show: 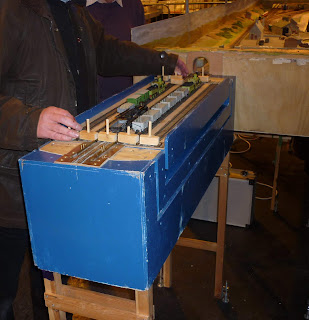 John had brought his P4 Midland Railway layout "Kettlewell" to Linlithgow, so here was a chance to see how the yard worked from up close. The design has a clever interlock to prevent the table being rotated if the sliding part is not centred. Full details are to be found in Scalefour News issue 178/179/180. Here are a few pictures. 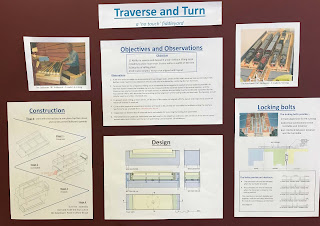 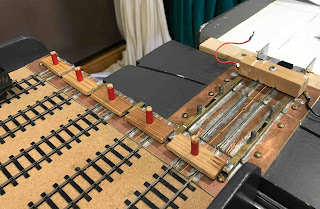 Above is the clever interlock. The turntable part has the exit track aligned by sliding bolts which are a snug fit in brass channels on each side of the gap. Tracks on the traversing part of the yard are aligned by further bolts in the same channel. However, the second set of bolts must be fully located into their corresponding sockets before the rotation bolts can be withdrawn - and the socket depths are arranged so that full location is only possible on the middle road. This prevents the table being rotated except when it is centrally aligned. 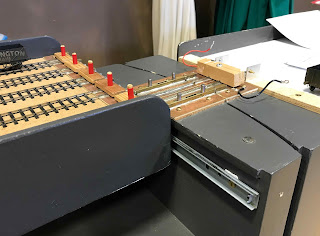 We broke off for a while to visit the "Four Marys" pub on Linlithgow High Street for lunch. 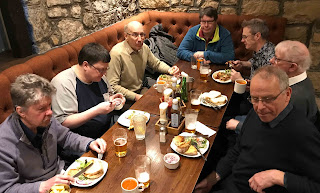 Alistair turned out to have brought some "show and tell" with him from his 4mm days: a Nielson pug, and a Caley 1 class tank: 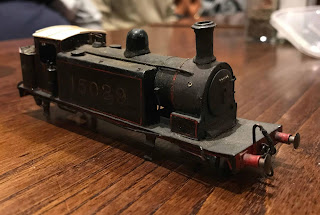 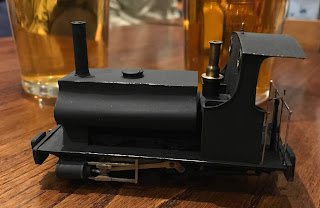 Then it was back to the Skills Day to learn from the experts and admire the modelling: Castle Caereinion, a nicely-presented finescale 009 layout (the owner was also showing a short length of experimental 8mm-gauge track, representing 2'0" gauge, with scratchbuilt stock running on 2mmSA wheelsets pushed in slightly on their axles!) 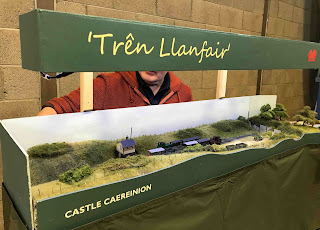 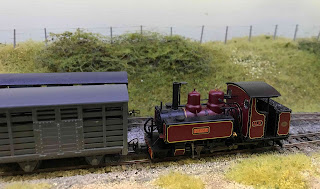 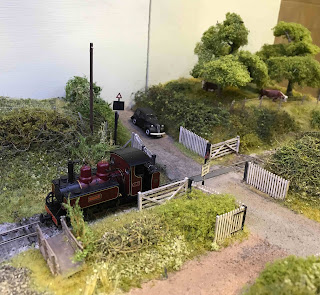 Another attractive layout was United Mills, which won an award at the recent Glasgow show: 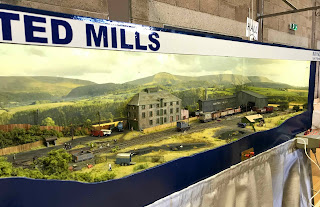 Kettlewell again, with a Scalefour Society mechanical lever frame modified to include a locking tray built from brass strip with the locks made from screwheads. I should have taken a detail photo but did not :-( but I expect it is to be found on t'Interwebby somewhere. You can just see it bottom left in this photo. 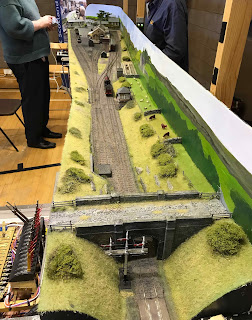 There was plenty more, but I spent more time asking questions and gazing at layouts than taking photos. However, I hope this gives a flavour of what was, all in all, a very worthwhile day. Our thanks go to organisers Jim Summers and Dave Franks, who made our group very welcome, and of course to all the demonstrators and layout owners and operators.

Finally after the short train ride back to Edinburgh, there was an added bonus in finding a loco-hauled train sitting in Platform 0 (the short bay on the Up side) at Haymarket. 68006 "Daring" and 68007 "Valiant" normally work a couple of suburban services, Monday to Friday only, round the Fife Circle. These turns involve far more miles as empty stock from their base at Mossend than in revenue service. This afternoon they were topping and tailing a rake of Mk3 stock, advertised as the 1800 service to Inverkeithing, just across the Forth Bridge. Scotrail does not normally afford such luxury to Fifers on Saturday afternoons, so I assume this was an extra train to handle the crowds from the Scotland-Wales rugby international just up the road at Murrayfield. 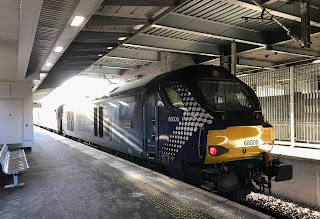 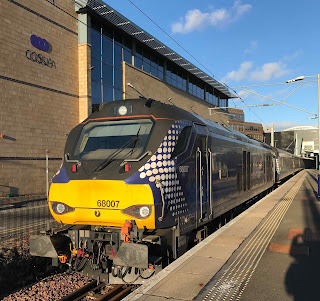 Next month we'll be back in Glasgow for a regular FCAG meeting, and there'll be none of this heretical 4mm stuff!
Posted by tin whistle at 19:18:00 No comments: