That mysterious rhythmic thudding sound which resonated across Central Scotland last Saturday has now been identified as the sound of the eager footsteps of the 2mm Scale Association's Forth and Clyde members approaching their monthly devotions at the altar of Tooemem, in the broad bright uplands of Almondell.

This months' attendance consisted of 3 to the power of two members, being 4A + 1C + G + 2J + M. It should have included an S, but that letter had been laid out with a lurgi. The meeting was supposed to incorporate a Zoom session for our far flung members, but unfortunately they had been flung too far to reach their computers so the meeting remained with The Nine who were physically present.

Prior to lunch, whilst the blethering did not reach the great peak of last month, there was still a sterling effort to amass much gossip and spread rumours and nonsense. However, eventually, all members settled down to some physically distanced modelling, prior to stuffing of faces. After their repast, members somnolently gathered round to watch the displays of current projects being undertaken by some members. Although the Zoom session was shut down when nobody tuned in, we were still able to display the various sets of photos on the laser display screen - one of the advantages of meeting at ESME is the availability of good quality digital projection equipment.

Andy was getting back into modelling after a hiatus caused by such nonsense as home improvements and had dug out his work station and was knocking up a soldered turnout: 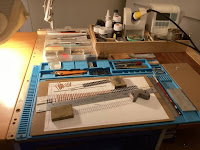 Andy had also brought along some photos of our old layout, Sauchenford (now retired to a safe house in Dumfries and Galloway). Amongst the pictures was one showing Colin, our late Area Organiser, working on the construction of the boards in Andy's garage, with our Senior Member, Alistair, in the background. 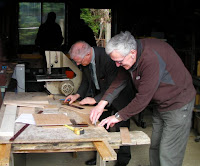 Seguing on nicely from our longest serving member to our most recent recruit, Martin showed his continuing development of a pre-grouping wagon fleet showing his expanding rake of Caley wagons (mostly from the Buchanan Kits range of member, Jim) along with a scratch built covered wagon.

He is also working on a Worsley Works Caley 45 foot Third carriage.

Speaking of Caley matters, our resident Caley expert, Jim, has been working away on his tiny, wee Connor 2-4-0 and is now at the stage of having the body on the chassis. Unfortunately, although he had hoped to show us it running on a test track, when he had put the body on to the chassis, it had badly affected the running of the previously sweetly controllable chassis. He thinks it is probably due to a lack of clearance between body and gearbox causing unwonted friction in the drive train, but had not yet had time to get all diagnostic with the wee beastie. Still, it made a fine sight in all its nickel-silver glory.

The other J, James, had been working on an Easitrak point kit. He had been introducing his own method of making the necessary internal electrical connections. He also showed a hand knitted turnout operation unit (using dauds of Plastruct) with microswitch for electrical switching of the crossing.

Graham, had also been working on turnout construction, but of soldered construction using the Association etched chairs as cunningly devised by Laurie Adams. He had had a precious attempt which had been a frustrating failure, but, with some lessons learned, he was much happier with the progress of this one. 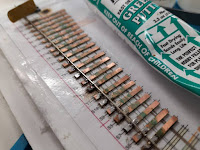 Graham was finding the wee jigs he had made with his 500MW soldering iron (see the November blog) of great assistance. He also noted that he found that construction following the "official" method was not always working for him. This led to some discussion with James, who has previously built a turnout using the same method, as to various tweaks to the construction methods which suited their own ways of working. They have been prevailed upon to write an article for the Association Journal to spread their ideas (not always the same as each other). Note for Graham and James - Prevailing upon will prevail until such times as an article is delivered unto The Editor. You have been warned.

To Jim's horror, Alisdair had been working away upon his scratchbuild of a push-pull fitted version of an ex-NBR class M (LNER class C15) 4-4-2T. It is progressing in a two steps forward, one step back fashion, but slowly getting there. The main part of the body is still to be attached to the footplate in this photo. He likes to keep the two separate to make it easier to add small details, but the moment of truth is coming soon, when the two will be forever forged in an unholy unity.

There remains a great deal of pipework to be added in and around the loco. Graham, as a member of the North British Railway Study Group, is very generously donating his time in seeking out photos and drawings to assist and has identified a gentleman in New York(!), also a member of the aforesaid Group, who is providing further information. Alisdair is going to have to take back all he has previously said about members of said Group...

Next meeting will be on Saturday 9th April.