Alisdair, Alistair, Jim, Stephen, Nigel, Chris, and Andy met at Graham's house in Edinburgh for our final meeting of 2019, on a dark and rainy day. However, we had a few interesting items to discuss.

One was our recent visit to the Edinburgh Society of Model Engineers' new Almondell club rooms and test track, courtesy of Alastair Wright, who is a member both of ESME and FCAG. It certainly gave a fresh perspective on setting out civil engineering works and track ... ESME runs 3½", 5" and 7¼" mixed-gauge track in several different circuits on a site they had to reclaim from waterlogged woodland. Site Boots were very much the dress code of the visit. Here are some photos from the visit. 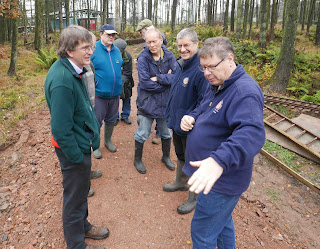 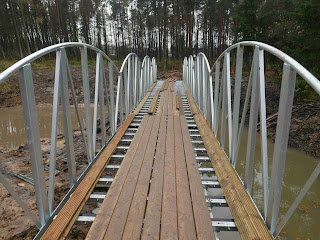 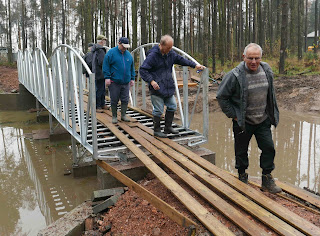 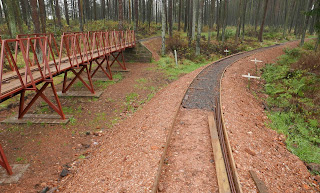 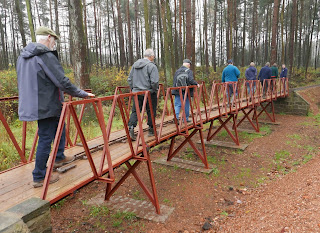 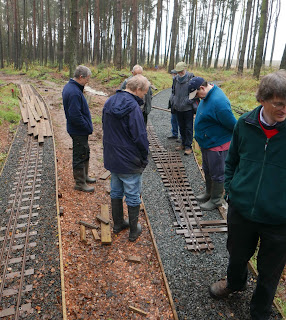 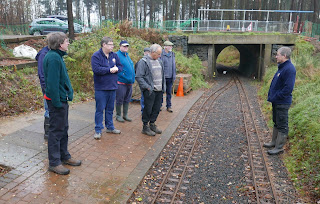 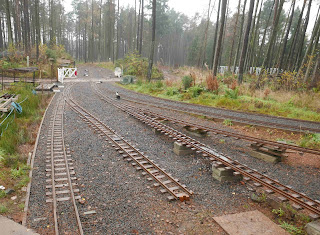 We also had a tour of their clubrooms which are spacious and conveniently half-way between Edinburgh and Glasgow. ESME members have been working for several years to bring Almondell to its present state and it promises to be an excellent set-up. I have the feeling we'll be back.

Back to the FCAG meeting ... the object of the meeting was, yet again, to improve Sauchenford's trackwork and check which locos and stock work without issues. Some more progress was made with this, and we will have several more sessions before Model Rail Scotland in ten weeks' time. Ulp !! 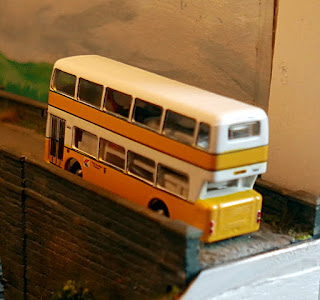 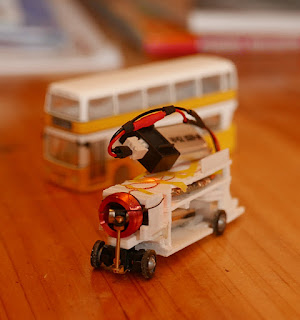 He achieved this using a commercial bus body with a coreless minimotor from Tramfabriek and a 64:1 gearbox from an undeclared source, powered by a 70mAh lithium polymer rechargeable battery. The bus has a steering axle taken from a Faller guided road system vehicle, directed by a commercial mechanism intended as an actuator for micro aircraft control. This uses a combination of a permanent magnet to return the steering to its neutral position, and a current through a coil working in conjunction with two further magnets to turn the steering axle in one direction or the other depending on the direction of the current. The actuator has a commercial radio control box which also has auxiliary outputs to operate the propulsion motor. Fiendishly cunning. Here's a video clip of its operation, with the creator explaining the mechanism while the rest of FCAG tries, unsuccessfully, to put him off.

Subsequent attempts to drive the bus on Sauchenford were abortive, since the roadway was not built with vehicles in mind and the bus has very low ground clearance. Nigel has obviously not prepared well enough to be ready for his PCV licence test, far less to take on the Laurie Adams tractor challenge. Give him time though ... a furniture van or large horse box would be much more in period and is almost the same size as that bus ...

Jim has been working away steadily on his Caley Jubilee tank. He described his technique for assembling the injector - unfortunately rather out of focus in this shot, but it's the blob nearest the camera - and surrounding pipework.

First, he filed the injector up from brass, leaving a small spigot for eventual insertion into the model. Holes for pipes were drilled in it and the pipework bent up from pieces of wire, which were given bends in the excess material so they could be held steady. They were then tinned, given a fresh lick of solder paint, and inserted into the holes pre-drilled in the injector , before being held in place by blu-tak at the bent end in the excess. Once all was correctly positioned, a quick touch with the iron did the job. By applying the iron at the back of the injector, minimal solder ends up on the front.

Jim has also been experimenting with Birchwood Casey aluminium blacking solution obtained from Eileen's Emporium to blacken various parts of the loco. 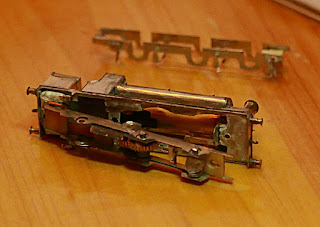 He's broadly happy with the result. More details in his RMWeb thread. We also admired the detailed backhead he has prepared for the loco cab. 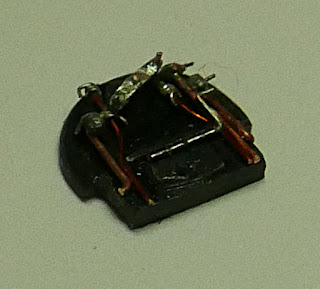 Chris had brought his 4F chassis which had slightly binding side rods. Both Jim and Nigel spent some time working on these with him. 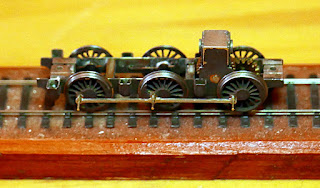 Alisdair had a small case of varied rolling stock with him which he has been fettling up for the exhibition, including some Buchanan Kits CR and NBR dropside wagons.

Finally a couple of photos of pre-grouping locos waiting their next turn of duty on a sunny day at Sauchenford 110 years ago ... just the kind of daydream needed to forget the miserable day outside.
Our next meeting, in January 2020, will be in Glasgow.