And so they came; pipes skirling, drums a-beating, flags flying, plaids swinging, claymores and pikes in hands: the Forth and Clyde Area hordes of the 2mm Scale Association marched on the rural hamlet of Almondell to ensure that the banner of 2mm Finescale was, once again, raised in defiance of all non-believers. The Loyal Few, holding out against the rabble assisted by bulwarks of Easitrac and 3D printed locomotive wheels. Few came to see them, but they marched onwards driven by a righteous pride and a fervour unknown to those who worship at the false gods of other scales and gauges. Not for glory did they march,  nor for the seeking of riches. No! They marched to get to the hallowed portals of ESME, there to partake of the time-honoured rituals known as gabbing and drinking tea. Will our descendants see the like again?

Yes indeed, it was the gallant hordes of 2mm modellers who gathered together once again. Hordes being defined by this scribe as the maximum he could count to, using only the digits on his hands. Mind you, that includes the one he was using to count. (Higher numbers would entail him taking off his socks and shoes. Which may well have caused a stampede for the doors, as it is some years since he has had to count such big numbers.)

The 1001 (for those who are binary) attendees this month were the full complement of Als, being 3 in number, an Andy, 2 Js, a Martin, a Nigel and new boy Miles. The last had caused some consternation amongst the older members. It was by no means certain the the Group could put up with yet another North British enthusiast, but tolerance prevailed, although it was a close thing. However, he has been warned to be on his best behaviour as we will be keeping a sharp eye out for any NBR evangelism breaking out within the Group. Perhaps he'll see the error of his ways in due course.

This month, Nigel had a full car as had brought the embryonic layout along with the factory equipment for the mass production of pcb sleepers for the Association Shop. First of all, the layout created from Nigel's design, laser cut by Chris, and put together by Nigel. A nifty piece of work and craftsmanship, which is easily broken down to form a box, it goes together nicely. Unfortunately, the scribe is not much use as a journalist, as he forgot to take any photos. Come back, Press Officer! All is forgiven (nearly). Fortunately, the new boy did take a photo, which shows the beast in its built-up state surrounded by an assortment of other beasts. 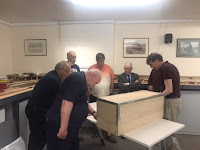 Much discussion of electrification to suit both DC and DCC operation (at different times) and point operation took place. We even reached agreement with very few blows being exchanged. Outcome being simple isolation by turnout for DC operation, slide switches with wire in tube for point operation and slidey under board turnout operation units available from the 2mm Shop.

The factory production of sleepers for the Association shop was underway in the next room and out in the sunshine. The Overseer made sure that production was underway at full blast in the four stage process. (It's actually three stages, but the Overseer had being doing some prior homework with the first stage, by cutting down the muckle great sheets of pcb into more manageable 17mm wide strips. (We were creating 8' 6" sleepers.)

Second stage was slitting the copper on the strip to provide the insulation gap on the sleepers, using a Fonly type apparatus created by Nigel, with a slitting disk and table over which the 17mm strip was pushed by the operator: 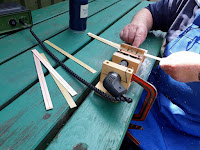 Third stage is the noisy one, using the sleeper chopper. An impressive beast, it fairly chunks out the 1.7mm wide sleepers, with the operator (wearing ear defenders) pushing in the strip and a guillotine driven by a Deltic engine (possibly) chopping off the sleepers. Wonderful stuff! The sleepers are collected in a margarine tub, cunningly hidden under the base. 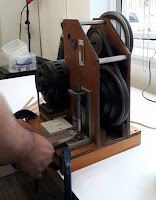 Fourth stage is weighing and packing the sleepers. Nae pictures, but.

James had brought along some models built by former member, Fergus, in the 70s or early 80s. Some nice scratchbuilt Highland Railway carriages and Banking Tank (missing its bogie) and some goods stock.

By the way, the photos were taken on ESME's N Gauge layout which is being built in the same meeting room. We are not moving to The Dark Side...

Meanwhile, in other parts of the room, some folk were creating creations. Alastair continues with the 3D model of an NBR (tch!) mineral wagon:

And Martin continues with his production line of some Caley (hoorah!) wagons and carriages, 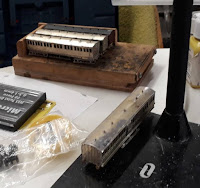 Talking of Caley (hoorah again!), Jim showed progress on his new Jumbo from his own etch:

Note Jim's creative use of the space in the tender to mount DCC chip and stay-alive components by mounting the motor off-centre.

James was creating a turnout for the layout, using pcb timbers and etched chairs.

And that's all I remember. It was a very long time ago now.

Next meeting on Saturday 13th August.