And so they flocked to that wooded shrine to small railways and general model engineering excellence, in the badlands between Livingston and Broxburn, ESME. Yes, yet again, it was the far famed and lauded 2mm Association's Forth and Clyde Area Group Meeting, when these staunch and devout devotees of The One True Scale (all hail to the 9.42mm track gauge!) gathered to join together in communal praise of mechanical mice.

This month congregation of nine, consisted of the trio of Als, with the others consisting of Andy, Graham, only one Jim, Simon, Stephen and lastly, but certainly not leastly, from the far west, crossing land and sea to attend, our man from the fabled, misty lands of the West, Richard.

After the usual blether about general modelling matters, this time with a very historical slant, the Glasgow Model Rail exhibitions in the Maclellan Galleries featuring high on the list of topics amongst the brethern (blethern?), each member grabbed a socially distanced table, setting up their modelling projects. Then, of course, borrowing the tools and materials they had forgotten.

Al#3, having given up turnout construction with individual chairs soldered onto copper clad sleepers for the putative Area Group layout, was making a turnout for his own planned layout of South Queensferry in the late 19th century. Given the place and time, turnouts had interlaced sleeper construction allowing Al to use Easitrack sleepers for the bulk of the turnout. He was pretty pleased with the progress he had made by the end of the day, with the crossing in place. Next step will be working out where to put the necessary copper clad sleepers to support check rails and the point blades.

Richard was producing another NCB hopper wagon, from his own etch design and had brought along some of the ones he had already produced. A fine model; he's going to need a great many to support his layout depicting Fenwick Pit. 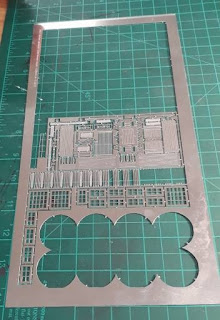 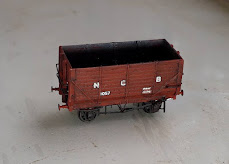 Simon was building an Association BR standard goods brake van. Sorry, no photos, but he had brought along some of his recent output (not including his multitude of fish vans). The beaver tail observation car is from a 3D print from Shapeways. He is still puzzled as to the best way to glaze the subtle curves of the tail. He also brought along his completed tandem turnout for the aforesaid Group layout. Looking good - all it needs now is a layout to put it on. (The tie bars are temporary until we decide the particular universe from which we will select our chosen means of point operation.)

Whilst on the subject of turnouts, Graham had brought the turnout he had been building for the layout. After struggling with the use of the etched chairs, he had been making amendments to the turnout, but finding that upon resolderingof the plates to the sleepers, adhesion went aglae resulting in many bad words and a stern resolution to abandon the use of etched chairs. So that's 50% of those in the Group who have tried that system have decided it is not for them.

Stephen was planning a layout to fit his man cave, using a classic layout as inspiration. Originally he had been planning for a roundy-roundy, but recognising limits in size while maintaining a decent minimum radius, he is now going for an end to end. Whilst the plan is ambitious, he is canny enough to plan for construction in stages to keep the impetus going, with some colour coding representing his current thoughts as to the stages. 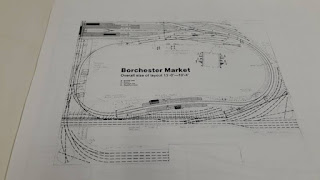 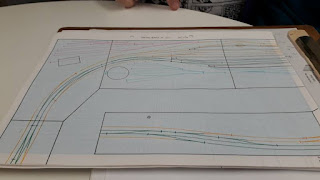 Al#1 was cutting out the walls for the farm outbuilding he has been planning. He is slightly baffled by the relationship of the various sections of the building. The drawing he is using shows only elevations, with no plan and it does appear that some imagination will be needed to make something which works. 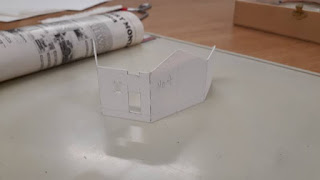 Al#2 built a set of access steps from the yard to the goods platform of his layout. He had also started on a removable sheep ramp for loading the top deck of double decked sheep vans. Down such rabbit holes does the sport of railway modelling lead us... 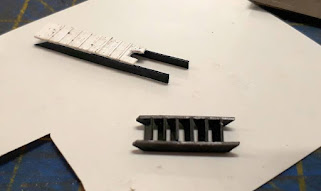 Jim was building a wagon, again from one of his own etches, a CR mineral wagon (I think). He needs rather a lot of these beasties for his layout, Kirkallanmuir. 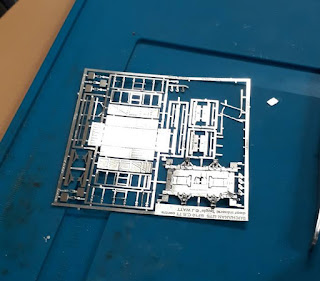 It fell unto the lot of the aforesaid Jim to give that day's talk, this one being a short demonstration on bending wire.  Jim's calling as a mouth mechanic had given him plenty of practice in bending highly recalcitrant stainless steel wire, which has stood him in good stead for modelling. He showed us a couple of his orthodontic pliers: one type which have a great advantage of coming parallel at 1mm open jaw, meaning the tips are fully touching when the pliers are closed ensuring an excellent grip of the wire,(a situation not usually met with in ordinary pliers): 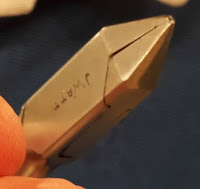 And another type with one tapered circular jaw against a flat jaw, for creating curves. Nae picture, but.

Jim demonstrated different means of straightening wire depending on the hardness of the wire. Guitar string should spring into a reasonable verisimilitude of an infinite radius curve when out the packet, but semi-hard wire like phosphor bronze will need running between thumb and opposing finger applying the appropriate force in opposition to the pre-existing curve. A bit of an art, easily learnt, but not easily verbally described so I'm not going to bother. As for soft wire, this can be straightened quite easily, either by stretching or by rolling between two hard surfaces.

As examples of bending of each grade of wire, Jim showed us by example, creating a UJ coupling wire from guitar wire and a downpipe from half hard brass with brackets in soft wire. Given the size, neither photographs well using my box Brownie, but you can gasp with wonder at these blurry images:

An excellent demonstration, enjoyed by all, including the hecklers at the back.

Next month will be Show and Tell time, with a Zoom session for the Ootlanders. Date to be decided.