Summer holidays and a spate of SWMBO orders reduced our strength for this month's meeting. Jim, Andy, and Graham met at Simon's house in the douce Southside of Glasgow. Roy of the Grampian area group also dropped in to collect a second footbridge for "Dunallander" from Jim, but there are no photos due to Andy's wee detour through the wrong suburb of Glasgow on our way to the meeting. No matter, Jim has written it all up on RMWeb. Dunallander itself, now looking very impressive with Mike Rasmussen's buildings, will make its first public appearance at the forthcoming Aberdeen show at the end of October.

By the time we'd finished our first cup of coffee it was almost noon, so ... bacon rolls (with Southside tomato slices) and cake came out. After we'd polished that off we staggered up two flights of stairs to the Railway Room.

Simon is now getting into his stride with his vision for a 2mm West Highland Mallaig Extension empire. He's planned this as a series of modules with standard interfaces between baseboards, with Mallaig terminus at one end and a fiddle yard at the other, with the potential for different elements to be extracted and exhibited. The concept sketch looks a wee bit like it saw the light of day after a heavy session in the pub rather than an Iain Rice-style reverie. Simon's not saying ... 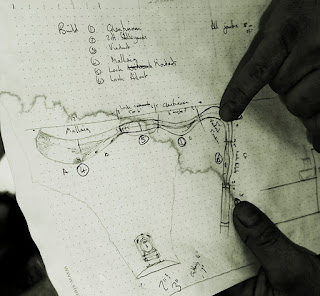 The Glenfinnan station board has been partly completed, using 4mm poplar and eucalyptus ply procured from a local timber merchant rather than a DIY shed. This has been used with softwood-block spacers to form the side beams of the board, with a ply skin added below rather on top of the boards. The trackbed will be a separate shaped piece of ply on risers, with lightweight scenic infill. The cross-bracing pieces slot into further softwood blocks which have a 4mm slot routed into them - a nice, neat job which makes for a very tidy appearance. The only difficulty encountered in construction was finding enough clamps to hold the whole lot together.

A Templot plan has been produced on top of scans of original large-scale plans from the ever-helpful National Records of Scotland; this has been used to produce the track profile boards. It looks rather impressive with a decent length train in position. None of us had realised that the prototype platforms at Glenfinnan are so short! Outside of summer, passenger loadings would rarely have reached this length, although the present-day "Jacobite" steam train comprises 5 or 6 B.R. Mk1's as far as I recall. 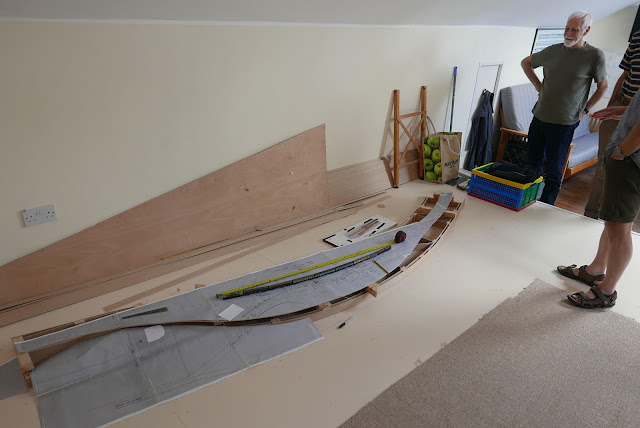 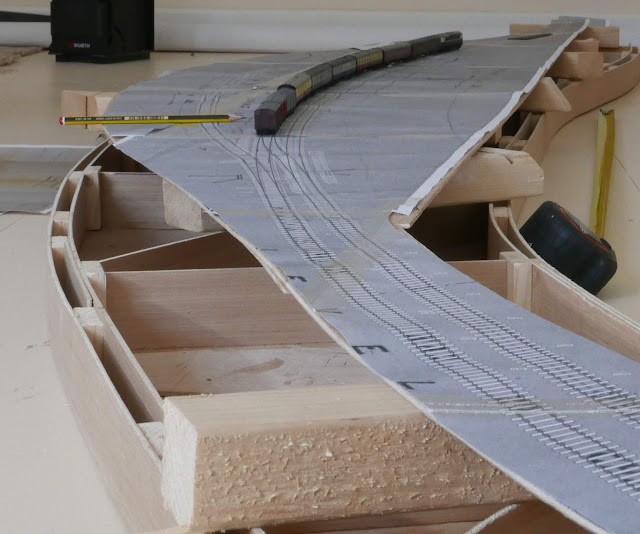 The next board to be built will be Glenfinnan Viaduct, to scale ... the scope for Harry Potter jokes and red-liveried Halls will no doubt keep future blogs well supplied with material.

Simon is also progressing with point construction, on a separate Templot plan copy taped to a small board. The Laurie Adams chairs are currently the cause of much effort and we discussed recent progress on tools to speed this up. 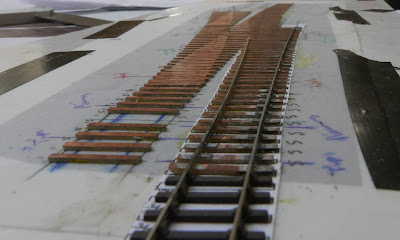 Jim had brought his Jubilee tank project with him so we could see progress. The chassis has all the compensation beams in place and looked impressive. (The front axle is a temporary one to keep the beams from becoming distorted through handling). It turns smoothly driven by a pin-chuck turning the motor axle, and under battery DC power. The loco will be controlled by a CT DCX76z DCC chip with keep-alive capacitors. The next stage in construction is to add the exterior cosmetic frames.

Jim spent his time working on the keep-alive capacitor unit, made up of surface-mount components. Andy meantime was repairing a point tiebar on his test-track, and Graham was working on the bodies for a batch of LNER fish vans (the things that look like chocolate bars in the plastic tub). 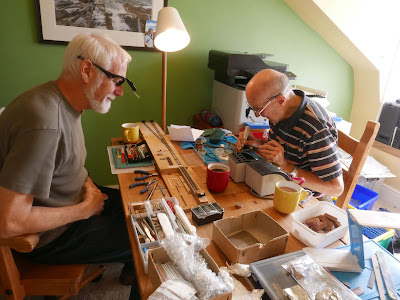 The next meeting will be in at Jim's in Biggar on 21 September (later in the month than usual), with plans to work on Sauchenford ahead of its intended exposure at Model Rail in Glasgow next February.
Posted by tin whistle at 12:30:00