"The spring has sprung, the grass is riz, I wonder where the 2mm chappies is?" So wrote our national barr, Robert de Irn Bru, in his epic poem "To an Easitrak Turnout". Of course, the answer came yesterday, when nine of southern Scotland's finest 2mm modeller chappies (as such all were) wended their way to the fine premises of ESME in picturesque Almondell. Those finest did not not include those usual stalwarts Al#1 and J#2, but Graham, J#1, Stephen, Nigel, the Junior Als #2 and #3, Simon, Andy and Martin made their way in the weak spring sunshine for the monthly blether session.

As usual, there was much talk before settling down to a bit of modelling. But hark! What was that sound of sobbing heard from the dark corner where Al#2 was lurking? It turned out that the eejit had forgotten his tools, so Martin and Andy rummaged through their own toolboxes to keep the overgrown toddler quiet. Al#2 then proceeded to do nothing much with them anyway, but others were beavering away on their Particular Pet Projects. (Ooooh! Wull ye look at thon! Smart Alec's daein' alliteration noo! Getting above hissel', so he is! Ah kent his faither, ye ken. Always had ideas above their station*, so they did!)

Those others included  Graham who, after many sair trauchles, had completed his turnout for the as yet embryonic Group layout, and brought it along to prove it. Despite his own self-deprecation, we (who are normally quite happy helping with his deprecation) were duly impressed. 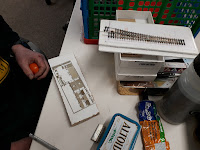 On the day, he was working on an Association kit for an amphibian of the LNER variety. There was much pondering amongst the motley crew as to why the LNER had aligned itself with the ungodly GWR in naming it's brake vans.

J#1 had come along with his completed tandem turnout for the Group layout. As expected from one of his experience, it looks the part. As Simon had already produced one, we'll have to invent some sort of  blind testing to choose which will have the honour of being place in the layout. Hmm...

Jim had also brought along his rather special Caley Conner 2-4-0 nearing end of its construction. It was set upon rails and made to run, which it did, but still with a wee bit of rubbing causing slight stutter. Knowing the maker, this will soon be dealt with to create a smooth running beastie. His (as yet unfinished) lining is a wonder to behold.

Talking of Caley matters our neophyte member, Martin, has been churning out rolling stock faster than St. Rollox back in the day. He is certainly putting us auld yins to shame. As well as adding to his burgeoning wagon stock, both scratch and kit built, he is now prodigiously constructing some 45 feet carriages, starting with the Worsely Works etches.

And he has also been playing with Easitrak turnouts, both old and new versions.

Nigel has been resurrecting some old coaches, which, some time ago, had been put away almost complete, but not quite. (I'm glad it's not just me...). They are some rather attractive Wisbech and Upwell Tramway vehicles, both the earlier 4-wheel and the later bogie varieties. They are going to make rather attractive vehicles with their low floors and verandah railings. However, the combination of those two features are giving Nigel a challenge in terms of getting a good fixing for the buffers which are above the level of the carriage floor. Knowing the man, there is no doubt a clever solution on its way.

By the way, the W&UT was the prototype for the Isle of Sodor Railway. I wonder how the faces are going to be fixed to the ends?

Still on the rolling stack, Alastair was drawing up a North British mineral wagon with the view to 3D printing them for his planned South Queensferry layout. Source material and sustenance to hand. 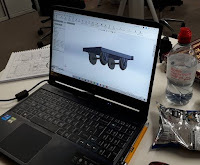 When they eventually roll off the production line, there is bound be demand for more from others. Although, I doubt that Jim will be...

Alistair also brought along some brackets he had 3D printed out from Nigel's model. These are to be used for assisting the construction of the layout to be cut from ply laser cut by Chris. 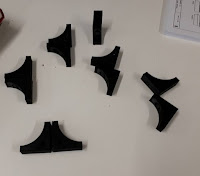 Meanwhile, Stephen had been on a spending spree, bringing along some N gauge goodies which he had recently smuggled into the house, on the basis that it is easier than an O gauge loco. The boxes contained a class 92, a few Caledonian Sleepers and the recent NGS Hunslet shunter. Just awaiting the procurement of some 2mm wheelsets. He had also brought along his usual stash of magazines which kept the rowdier members of the Group quiet for a while. 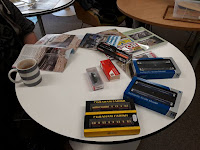 Next month's meeting will be on Saturday 14th May.