The Forth and Clyde Area Group and Grampian Area Group joined forces to stage the 2mmSA 2018 Scottish Supermeet in Perth on 21 April. We were pleased to see several new faces from Scotland and particularly happy that several members from south of the Border made the long trip north to show their support.

Jim Watt brought his Kirkallanmuir layout, seven years in the making, for its first exhibition outing. Here he is setting up the layout. The triangular sections of the legs fold flat against the end parts for easy transport; each of the three baseboards can stand independently, which allowed Jim to work at home on one section at a time. 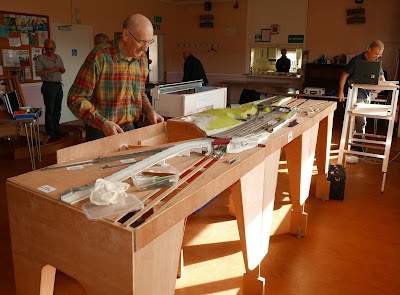 My photos don't do justice to the layout, which is in full running order, with buildings and scenery partly complete. Some more shots are in the August 2017 blog entry. Jim's own account of the layout's development on RMWeb is also well worth a read.

Jim had over 100 scratchbuilt pre-grouping wagons in use on the layout ... that's over 200 2mm scale Alex Jackson couplings! Not to mention the rakes of Caley coaches and the stud of scratchbuilt black and blue engines.

John Galbraith of the Grampian group had his new layout Glen Ammen, with a freelance plan and models of real buildings. The goods shed is a Great North of Scotland design from Mintlaw on the Buchan branch. The window frames are from modified commercial etches (an arched section at the top was cut off). 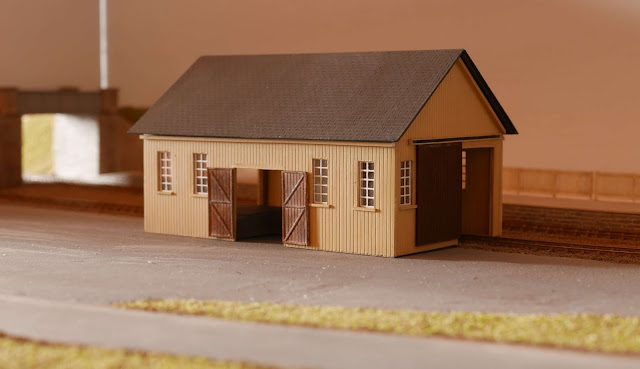 The station building is based on Careston on the Forfar to Brechin Direct section of the Caledonian. Again, the window frames are etches; the rest of the building is scratchbuilt. 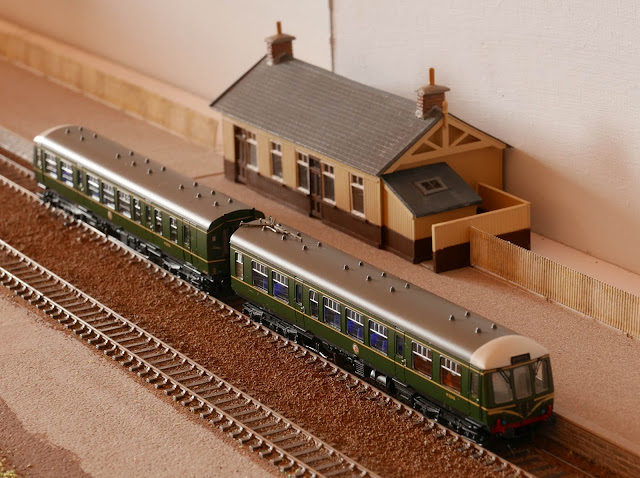 Some nice scenic work has been started as well, including this model of a bridge. The water in the burn has not yet been modelled. 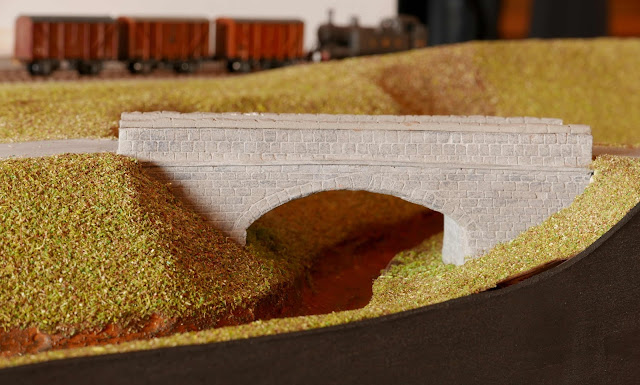 David Long had a new layout with him, Ashton Fold, with the track hand-built by David on individual ply sleepers procured from Chris Denning, formerly of York Modelmaking. 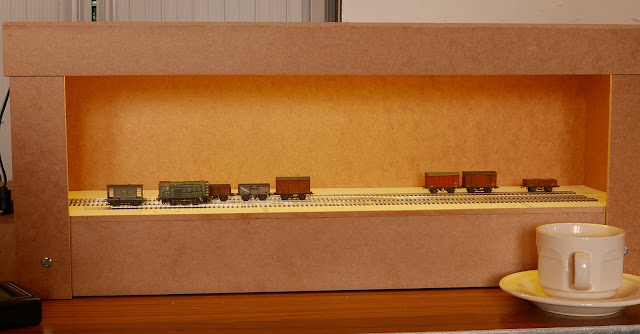 The entire structure is from MDF. The framing is from 4mm sheet,  with the baseboard of 6mm sheet. Although the large cuts were made at the supplier, David cut all the rest with hand tools, with enviable precision. 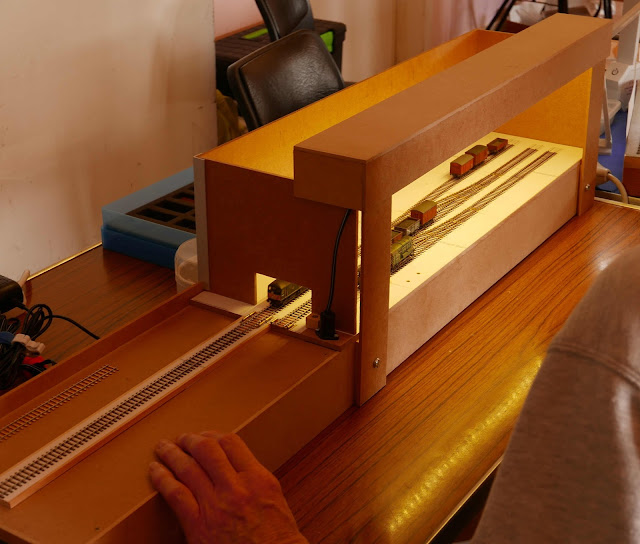 The view from underneath is even more daunting - no place for untidy wires to hide! Point motors are from modified servos, with the servo part removed so they work as stall motors., held in aluminium channel frames. The copper foil busbars are tell-tale signs of DCC control. Like at least two other layouts on display, David was using an NCE Powercab controller. The green board at the right hand end is a frog juicer.

Nigel Cliffe found plenty to discuss with David. The trackwork is beautifully delicate. 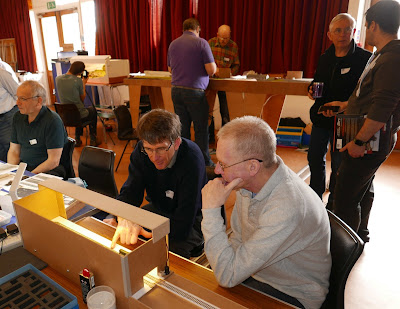 Alistair Mearns was shunting Sauchenford, which was appearing without its fiddle yards basically as a shunting plank. Alisdair Campbell's Black Five (from the 2mmSA kit), next his Caledonian signalbox, is the subject of this shot.

Mick Simpson had Callaton, with some new scenic work (the recent Gordon Gravett article in MRJ on making puddles with microscope slides has inspired a part-complete experiment next the VW Camper). The Farish Class 40, renumbered but not yet weathered, was working freight while a DMU ran a passenger service. Mick showed how scale shunting speeds and DCC sound can lift a cameo layout into a different class. Fascinating to watch. 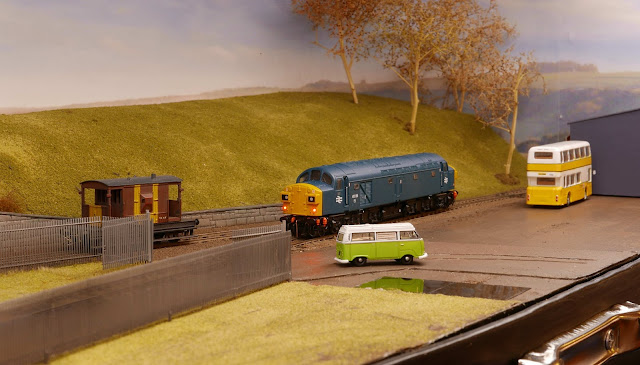 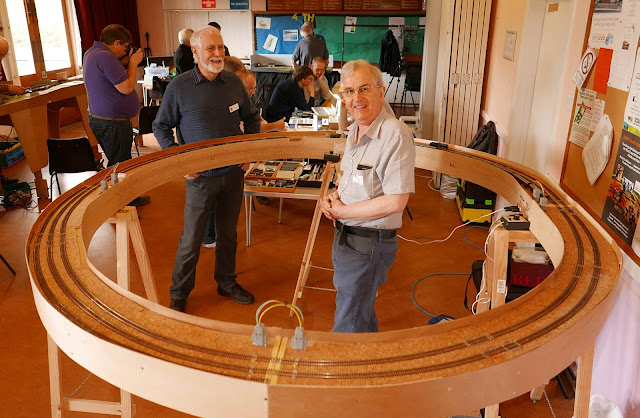 Laurie Adams was demonstrating and explaining his new etched track components as well as his point rodding etches. A 2mm magazine article is in preparation, and Shop 1 already has the components in stock, although they are not currently on the website. Contact the shopkeeper (or Laurie) directly for more details. 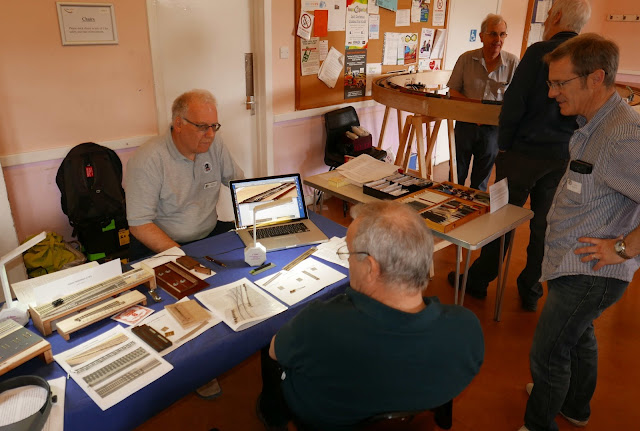 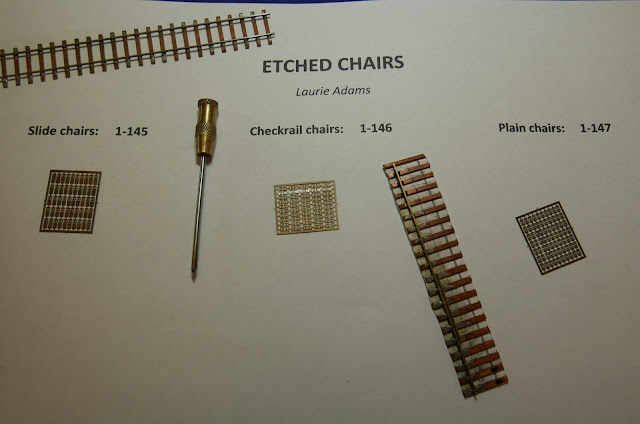 Jim Watt gave an illustrated talk on his building construction techniques for Kirkallanmuir.

Nigel Cliffe had his latest wheel manufacturing components available for inspection - a watchmaker's jewelling press, adapted using brass anvils to hold the wheel tyres concentrically to receive the plastic centres from steel pushers, and in a second operation, insert the axles squarely into the wheel centres, accurately spaced from the pinpoint, without damage. 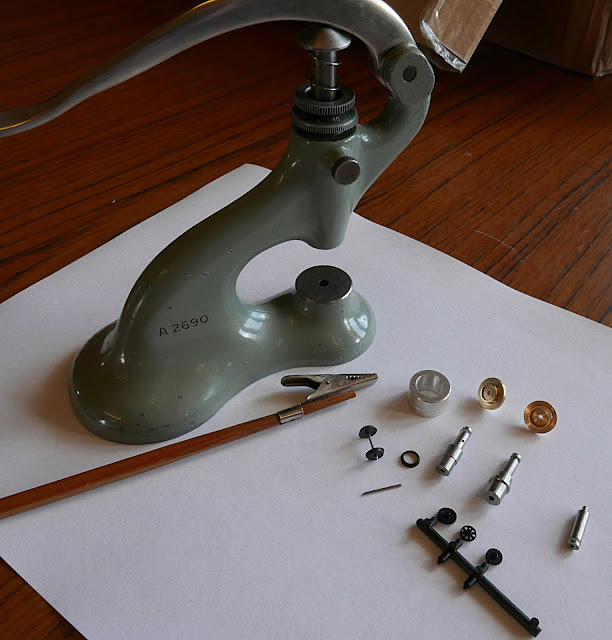 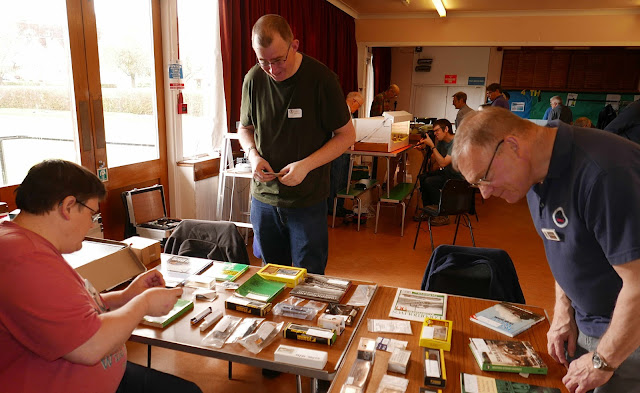 Thanks particularly to Jim, John, Mick, David, Laurie, Alistair, Tony and Roy for providing layouts and demonstrations, to Andy, Graham, Simon and Stephen for handling various admin tasks, and to Alisdair Campbell for once again organising the whole affair. We're already looking forward to Perth 2020 ! 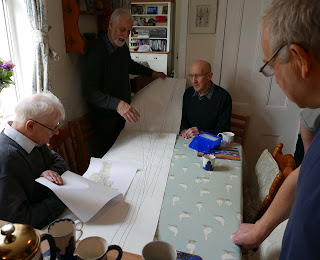 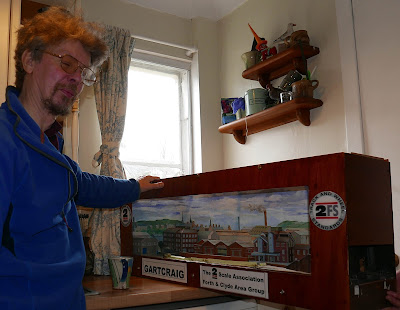 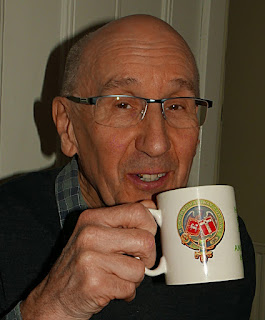 And that was that. See you in Perth next Saturday, we hope.
Posted by tin whistle at 14:04:00 No comments: