After the miserable attendance figures for the Group meeting in July, numbers were considerably increased for the August meeting. Eight stalwarts met at the ESME Pleasure Palace, albeit after having been reminded of where their loyalties lay, by some burly visitors to their houses carrying baseball bats. As a result a trio of Als, along with a couple of Jims and assorted riff raff without a name-sharing treaty, came together to chat for a few hours and occasionally pretend they were doing some modelling. (The chap, who shall be nameless, who turned up in a posing pouch was gently, but very swiftly, reminded that it wasn't that type of modelling which was required.)

Alastair, Alisdair, Alisdair, Graham, James, Jim, Nigel and Simon met to ostensibly talk about Track, based around the various turnouts being constructed for the putative new Group layout. First of all, we chose our socially distanced jousting positions. A few turnouts were shown, in different stages of construction: 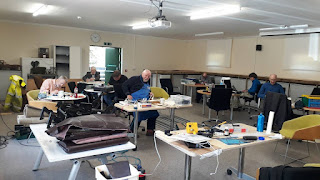 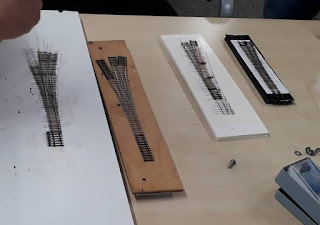 By chance and without malice aforethought, all the turnouts in attendance were those constructed in copper-clad sleepers and Laurie's etched chairs. (There are a couple of Easitrac versions under construction by some unable to attend.) Such little etched delights are available from a 2mmSA Shop near you but only if you are amongst the anointed who pay their subs to the glorious 2mmSA. (Words to the Association song "All hail to the small but mighty 2mm Finescale", will be available in the forthcoming 2mmSA Songbook, which will be available from selected refined and upmarket retail outlets across the world.)

There was a good deal of discussion about the best way to use the chairs; whether to slide onto the rail before fixing or sliding the rail into already fixed chairs being the question. It was agreed that do what suits you best would be the best approach. (Now there's a surprise!) Simon showed his version of the tandem turnout - well advanced and looking good. He had created a simple wee doofer to open out the chairs on the sleepers. The wee bit of rail has a nice taper at the end to make it easier to use.

James took the approach of threading the rails on the sleepers for his partially completed turnout. He had produced another doofer for threading the chairs on along a long length of rail. The wee clamp allows the rail to be slid along so that not too much pokes out to reduce the movement at the end of the rail on longer lengths.

Graham had had a lot of learning opportunities during construction of his turnout, the principal one (apart from the chance to rehearse his full vocabulary of bad words) was that this method of construction was not for him. Having said that, he had managed to construct a perfectly serviceable turnout (still to have check rails and stretcher added)

Alastair was at a very early stage of construction, having just prepared and laid out the sleepers. He was advised to gap the sleepers before laying rails, which he duly did during the meeting.

Jim produced a completed tandem turnout, which looked extremely natty, as should perhaps only be expected - he has produced a good number of such beasties over the years. However, this is his first using the etched chairs and he has produced an extremely neat job. The bits of Easitrac at the ends are a temporary measure to help with the alignment of the short bits of rails at the extremities. He had also brought along a couple of the Jim Patent Track Testing Wagons™; merely blocks of wood on a basic underframe which saves damaging detailed models whilst whizzing them through turnouts at TGV speeds to test the running qualities of the turnouts.

Incidentally, the wee "flags" in the foreground of the JPTTWs photo is James's version of the track alignment pins shown in the Association "Track - How It Works and How to Model It" book. James is a refugee from P4 (we accept all types - nae pride) who wishes he had known about such a simple wee gadget before he Saw The Light. Just goes to show what those benighted souls in bigger scales could learn by buying a copy of the foresdaid book. Available to non-members by post from the Association at 2mm Scale Association Promotional Products for the appropriate quantity of spondulicks.

Meanwhile those who had no turnouts to show off, skulked in corners sulking and kidding on they were enjoying themselves. However, they consoled themselves by doing some other modelling.

Nigel was active in producing some buildings for the rear of his layout.A low relief  northlight factory building was shown. Extremely neat with etched windows. He was also churning out another low relief building with 3D printed windows, but the idiot photographer forgot to take a photo to show you the comparison. 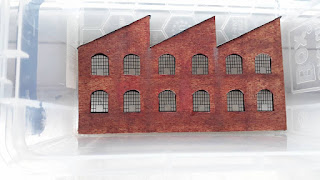 Nigel also spent time on his laptop, doing the design for some new Association Mk5 driving wheels to go under some obscure Southern Railway locomotive (Merchant Country or something like that) Entreaties from some not to waste his time on such like, when he could be doing the same for every class of Scottish Pre-Grouping locomotives (even, in a fit of ecumenical fervour, allowing that NBR can only be (just) be an improvement of SR) were, quite rightly, ignored.

Alistair was preparing a design for a wee farm building he intends to construct. A complicated wee beast with the drawings allowing his artistic talents to shine through. 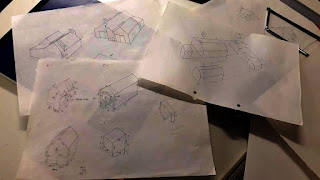 Alisdair was preparing the trackwork for some additional cassettes for his wee layout, as well as showing off his Highland Railway Directors' Saloon and assorted platform paraphernalia; oil lamp baskets on posts, a luggage hurley and a couple of footstools needed by the unfortunate passengers for HR trains who had a steep clamber from the very low platforms the HR provided at stations, in its typically parsimonious manner.

Jim also showed the canopies which he had built, using his own etches, for the Grampian Area Group's Dunallander layout. Lovely stuff, with the equally lovely buildings having been built by Mike of the Grampian loons.

And that was about it (forbye, my fingers are getting worn done with typing this twaddle).

Next meeting will be a bit earlier than usual, on Saturday 4th September, with a Zoom meeting in the afternoon to allow far flung members and the loons from the North-East (of Scotland) to join in for a whiley. Subject to be decided after a few more beers.