First up was Andy, who for historical interest showed us how he'd created the hillside for a viaduct on his previous layout with layers of expanded polystyrene in the traditional way. 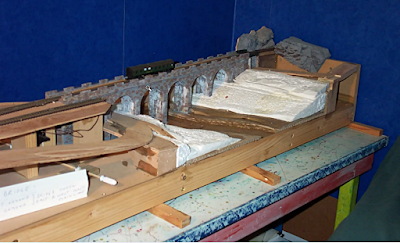 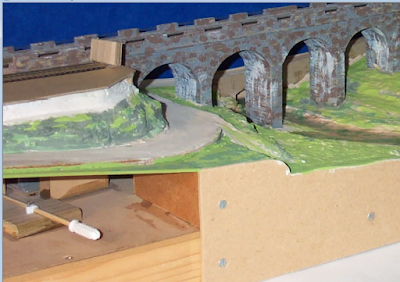 More recently he hit on a good technique to represent birch trees: trunks from a wire armature, coated with PVA glue which is then dried with a heat gun. Foliage from commercial sources is then added with a spray of glue: 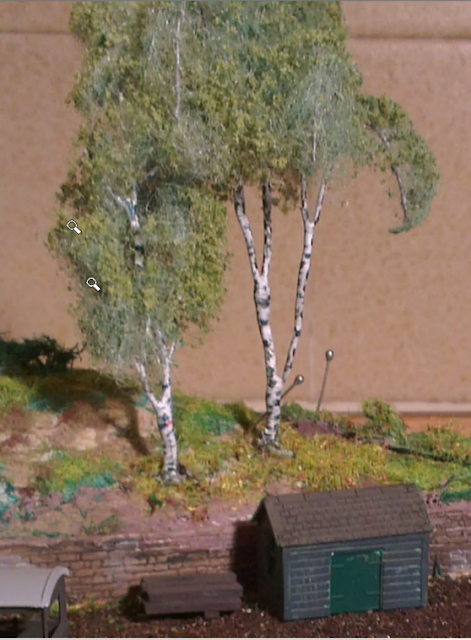 The end result looks very convincing. Ignore the pins, the glue was still drying! The wall in this diorama is simply made from a photo of a neighbour's garden wall stuck down on card, and looks fine at normal viewing distance.

Simon showed us progress with Glenfinnan. The substructure for scenery is built up with high-density foam which can then be carved away as required. 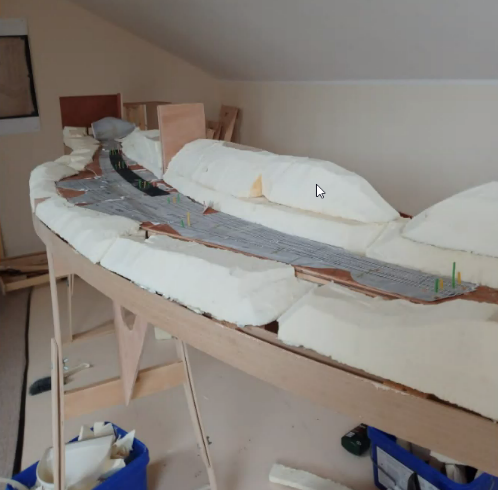 The backscene will be painted onto a continuous roll of vinyl salvaged from a discarded pop-up marketing banner (no, not the one from the 2mmSA roadshow!) and will be supported on uprights which will slot into the gap of the beam (two skins of ply with softwood separators) at the baseboard edge. 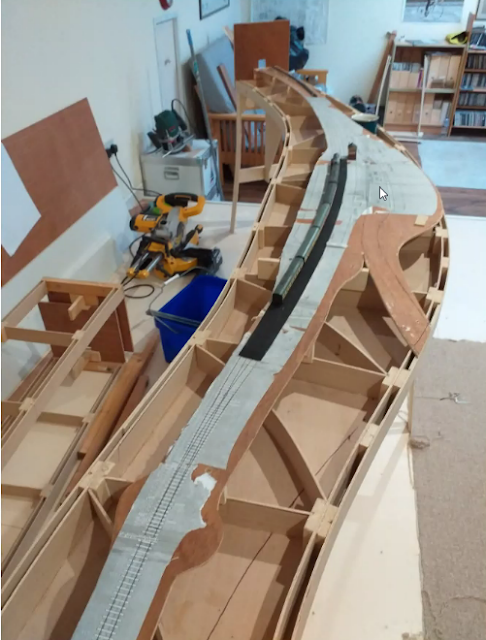 Simon uses thin neoprene rubber sheet as a track base, aiming to get some sound insulation. This led to some discussion ... the consensus was that good running is far more important than a noisy baseboard, and that a soft track base material is likely to lead to trouble which can only be remedied by ripping up the track.

Mick showed us how scenery for "Callaton" had been built up from scribed board for retaining walls: 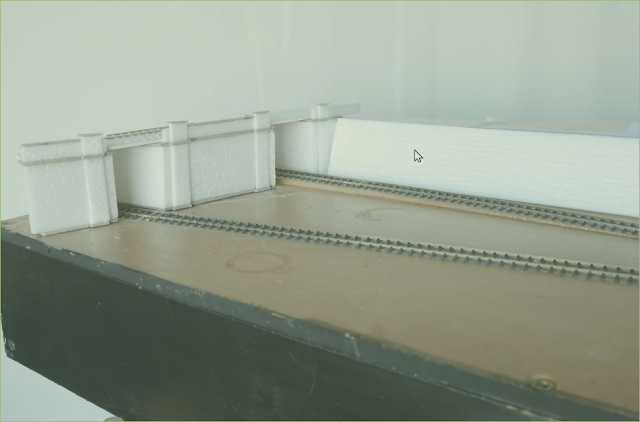 and strips of Weetabix packet (now we know where he gets his muscles from) glued into a grid with PVA as a landscape former.

This is then covered with a single layer of paper towels, glued down with more PVA:

which is then painted.

To replicate sidings where the ballast is covered with a layer of earth, oil and general muck, he used slivers of cardboard between the Easitrac sleepers, trimmed off neatly then edged with a larger piece of card:

This works nicely when coloured and the gaps filled (adding weeds as you go). However it's best planned before tracklaying commences; it's somewhat awkward to retrofit.

Mick also showed some pointwork for the "kip" on his latest project, "Pitt Hill". 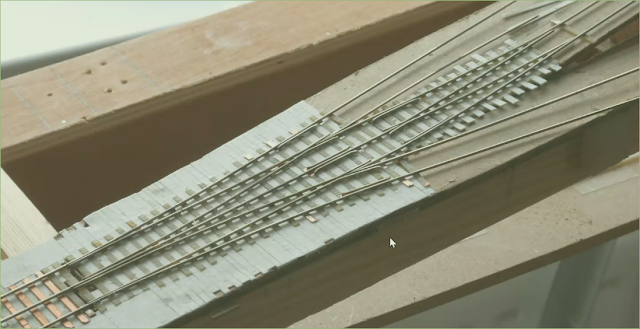 He also showed us a video of it working ... but it has not yet been approved for general release by the British Board of Film Censors, so for now you will have to wait.

Jim showed a few photos to illustrate his approach to scenery. In his first layout "Connerburn", developed in the 1980s, he paid careful attention to distracting the viewer as a train left the layout for the fiddle yard, placing distractions such as trees, signals, road vehicles and shrubs to catch the eye: 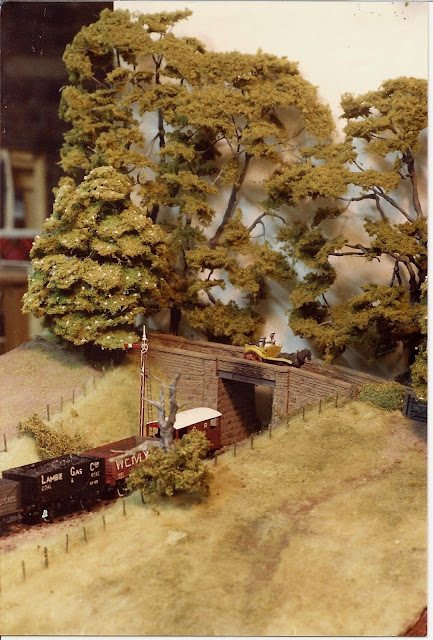 Scenery on Connerburn was built up with papier-mâché made from old egg cartons over card formers: 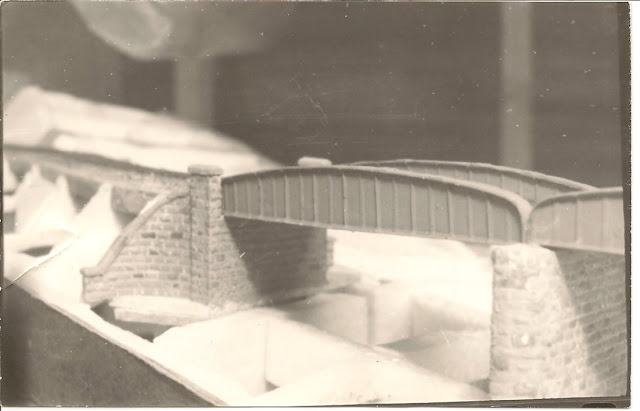 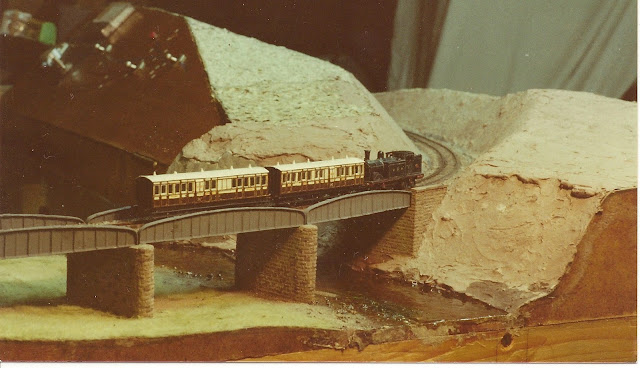 Paint and tree-planting completed the scene. 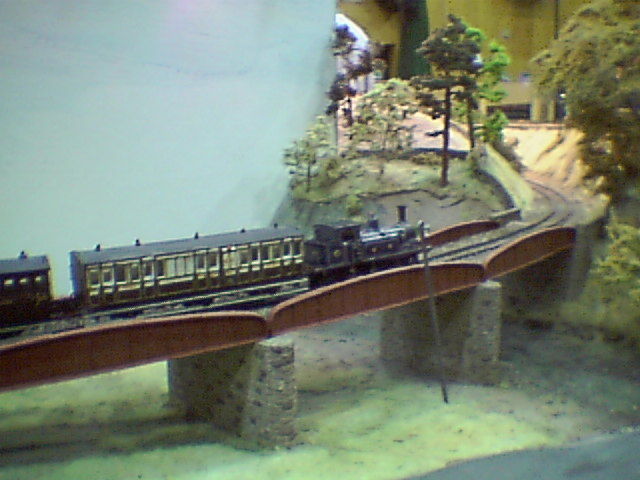 On his current project "Kirkallanmuir", some areas have been built up with expanded polystyrene rather than paper over card formers, to give solid material into which tree-trunks can be inserted. This is covered with a thin slurry (aim for the consistency of double cream) of DAS modelling clay, coloured with powdered poster paint. The advantage of using DAS is that it can be reworked once dry - when moistened it becomes pliable again, and can be re-sculpted with fresh material blended in if required. 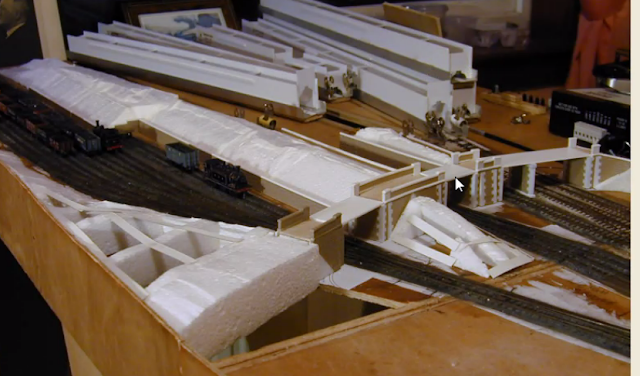 Jim's approach to modelling sidings with sleeper-level muck is to use a sand-plaster-Cascamite glue dry mix, spread into place, then moistened with water with a drop of washing-up liquid added to destroy its surface tension. The best way to apply the water is using an eye-dropper drawn along the railhead - this soaks into the ballast mix and hardens after a couple of days.

We had a short digression about track, which led Tony to mention the advantages of buying rather than building pointwork in order to put a trouble-free result in place quickly. As ever it's a question of saving time by spending money, but if trackwork is not your favourite task, it's worth considering seriously. Tony shared an image of some pointwork he commissioned from Keith Armes and very nice it looked too. 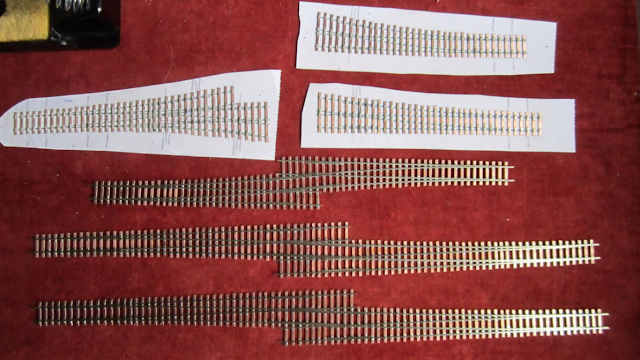 Now that most of us have had a second vaccination, after 15 months of Zooming we plan to have a Covid-compliant physical meeting on 12 June, as long as it remains permissible. Thanks to the generous hospitality of the Edinburgh Society of Model Engineers, this will be at their newly-completed Almondell Model Engineering Centre near Livingston in central Scotland.

To ensure we stay in touch with some of the further-flung group members, however, we won't abandon the virtual part entirely. It will be interesting to see how this new format evolves. Each member must remember to bring their all their own modelling kit, facemasks, lunch, crockery and utensils ... everything except the kitchen sink, which is already available at ESME.