This month's virtual meeting was on the theme of soldering: Andy, Graham, Richard, Stephen, Martin, James, chairmanJim, Simon, Chris G and Chris M provided the audience and Jim, Nigel and Alisdair formed the "panel". The following write-up is in no way a primer or even an exhaustive description of each panel member's favoured methods, but simply a quick record of what they said on the day. Those seeking a reference are directed to Chapter 5 of the 2mmSA's "Track" book.

Jim kicked off with an explanation of his personal technique. He uses a silicon phone-repair mat for a work surface, ceramic-tipped tweezers to hold components or pieces of etch, and a small piece of plywood when a firmer work surface is needed. A small brass sheet acts as an anvil on which to separate etch parts. 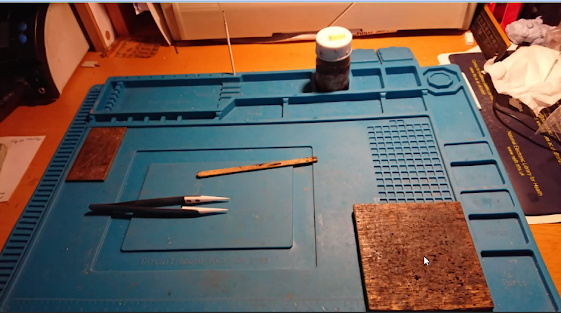 Soldering, he explained, requires formation of an alloy between the surface of each metal piece being joined and the solder itself. The three indispensable elements are heat, clean metal, and effective flux. The flux dissolves oxides on the metal surface and coats it, preventing new oxides from forming so that the alloy is strong, and transferring heat quickly through the joint area. 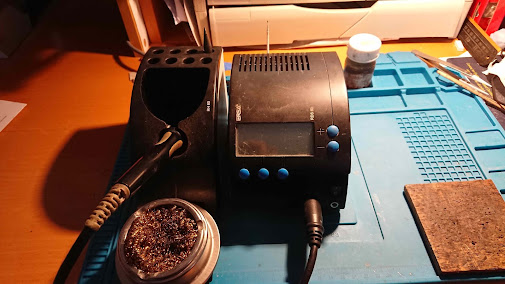 His preferred bit is a 2mm chisel shape - this, combined with the 80W iron power, allows him to use a "quick in and out" technique to work quickly and cleanly, dwelling on the joint long enough to ensure good solder flow and an effective joint. 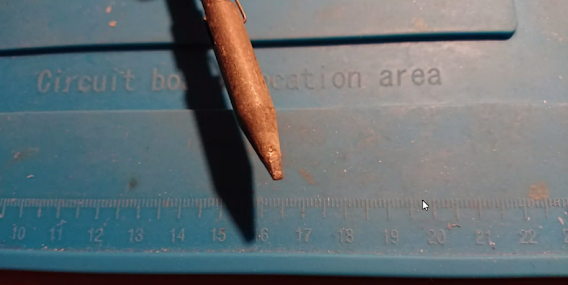 He prefers 188°C solder paint to paste, cream, wire or sticks, and after years of using a cocktail stick to apply the paint to the work, has recently switched to using a plastic applicator which is less likely to shed fragments into the paint. His tin of paint has lasted years: if it dries out, a drop of water restores it. Tap water in Scotland is generally soft (slightly acidic),which does not affect the chemistry of the flux in the solder paint, but those in hard water areas should use deionised or distilled water (such as is supplied for car batteries) to ensure that the flux, generally phosphoric acid, is not neutralised by the carbonates in hard water.

In the image, a drop of paint has been placed on the holes for the bearing cups in a wagon chassis etch. The cups are placed face down on the mat and the etch manoeuvered over to locate them. They are then soldered with a  touch from the hot iron, which is cleaned first by plunging it into a small wad of brass wool such as this. 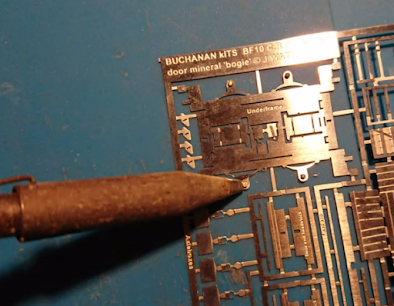 When laminating layers of etch together with solder paint, Jim finds it unnecessary to tin the surfaces first - instead he simply paints the inside of the sandwich, folds the etch over, holds the two layers in contact using the tweezers, then applies the iron and draws the tip slowly round the metal surface so the solder flows. In the shot below, a multi-layer window is being built up. 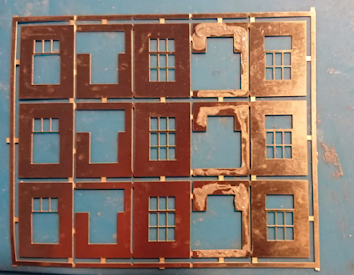 The fold tabs and etch frame are not removed until the laminations are all secured. 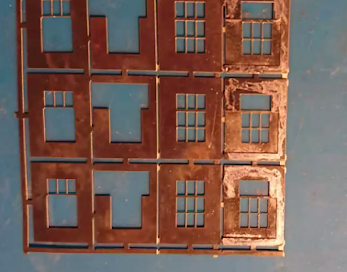 If solder paint is not used, however, then both sides of the sheets to be laminated should be tinned first.

If the edges of laminations are apparent and this is visually obtrusive, for example on solebars or wagon framing, a useful tip is to flood the edges with low-melting-point solder or whitemetal (that is, the stuff that melts at below 100°C, not the 145°C solder) , which fills the gaps, then the edge can be tidied up with an old file. (Solder clogs files and reduces their effectiveness, so only old or worn ones should be used for this).

Another use for LMP solder is to attach smaller fittings such as chimneys and domes to larger metal objects such as boilers; the joining surfaces are tinned first with ordinary, then with LMP solder, which makes it easier to attach the small items in spite of the larger thermal mass of the boiler which can otherwise make it hard to bring both surfaces simultaneously to the temperature required for a good joint with ordinary solder alone. The bit must be cleaned after use to avoid corrosion by the different solder; alternatively, a different bit can be reserved for LMP use only.

Nigel took up the discussion with some pictures of his equipment. His soldering station, an Antex 660 TC, allows variable tip temperature and 50W of heat, and plug-in irons. Nigel works at 275-300°C most of the time. He has two irons, one with a small chisel tip, one with a round tip, and just plugs in the best one for the job in hand. 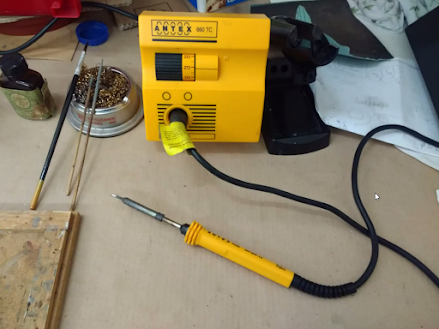 Like Jim, he cleans the tips on brass wool. Two kinds of cored solder are visible in this photo - one has a tiny amount of silver which aids flow for some joints -  as well as Carr's 188 solder paint and Green Label flux. 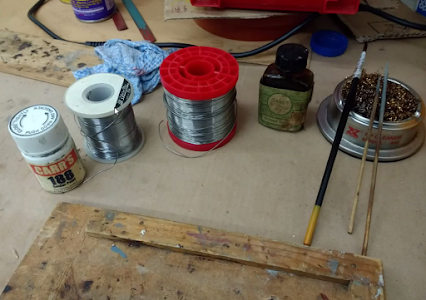 A wooden work board has "fences" of stripwood fitted to stop small items sliding away from the iron. Clamps of the David Eveleigh skewer-and-clothes-peg variety are also very useful to position work. 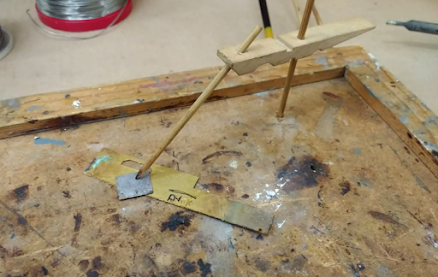 Etches and parts are cleaned with wet-and-dry paper, emery cloth, Garryflex blocks of various grits, and (sparingly and carefully, on account of the sharp stray fibres which can irritate skin, lungs and eyes) a fibreglass pencil. 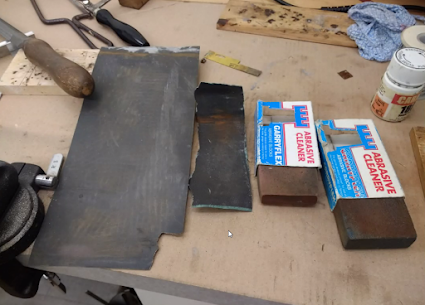 Workholding involves not only a conventional small vice with smooth jaws, but this highly desirable Eclipse toolmakers vice ... I think it's a model 180. 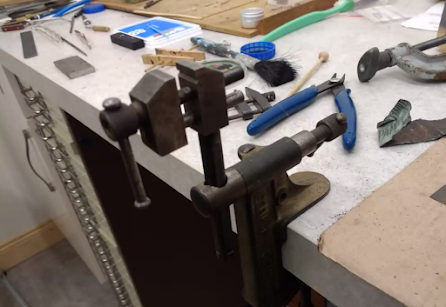 Cleaning up is made much easier by use of an inexpensive ultrasonic jewellery cleaner from eBay. Nigel simply uses a water bath for 10 to 20 seconds. 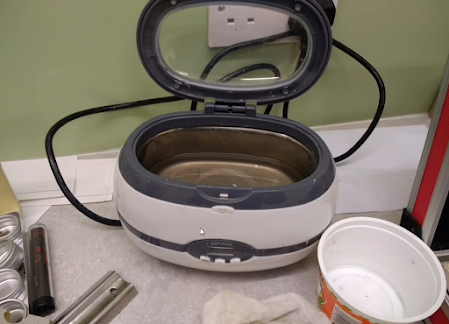 He still prefers steel tweezers ... flux spattering on these will rapidly corrode them so they must be carefully cleaned after use, or given a quick dip in the ultrasonic cleaner.

For some jobs it's hard to beat a resistance soldering unit (RSU) - this is a London Road Models unit - it comes with a probe lead, an earth lead, and a footswitch for operation. 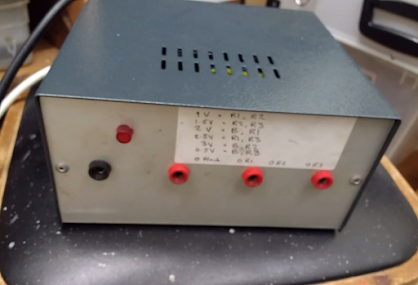 Work is done on a metal sheet, or metal foil, connected to the earth lead. 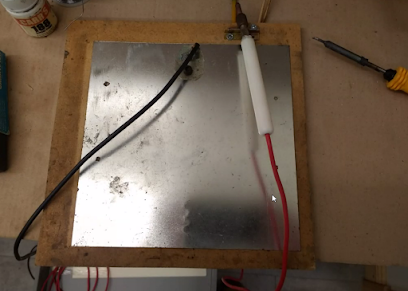 The probe itself is a short length of carbon welding rod, brought to a fine point using a pencil sharpener, and clamped by a small collet to the probe lead. The tip is a consumable which is sharpened as often as required, and replaced when necessary. 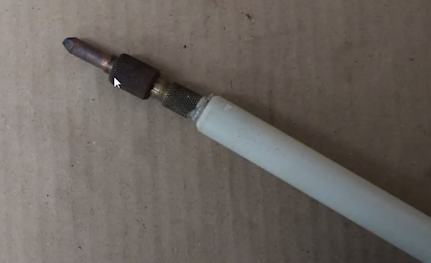 A recent Scalefour Society video tutorial by David Brandreth gives an excellent introduction to RSU use.

Another handy technique in certain situations is silver soldering - especially where a strong joint is wanted which will not be loosened by further work with soft solder around 300°C. The work has to be bound firmly in place using fine wire or clamps, the joint prepared with small slices of silver solder and covered with paste or powder flux suitable for the two metals being joined, then heated to between 600°C and 800°C depending on the grade of solder, using a small gas torch. 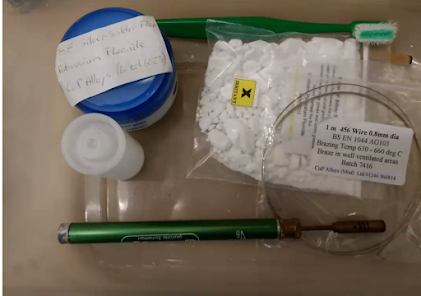 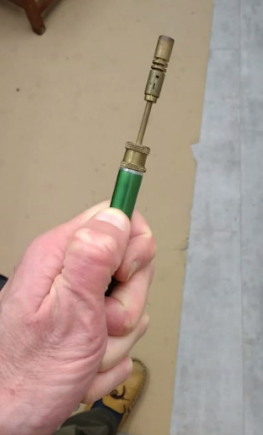 Neither Jim nor Nigel were keen on of solder balls, preferring simply to cut small slices of wire solder, but other FCAG members were enthusiastic ball users, especially for trackbuilding to create consistently-sized chairs.

Other tips shared included being sure to plunge the iron tip into the brass wool before and after every joint, so ensuring a clean bit, better joints and extending tip life. Tips, usually made of copper, are normally iron-plated to prevent corrosion by the flux; the plating must not be damaged and the temptation to file the bit to special shapes is best resisted, or done using a spare bit. Some members spoke highly of solder cream, "hot tape" to position components accurately, and Loctite TTC-LF or similar tip tinner/cleaner for situations where despite best efforts a bit has become dirty. Cleaning up joints is helped by a variety of tools, including old files, scalpels, triangular scrapers, sharpened jeweller's screwdrivers, and so on  - here are Alistair's: 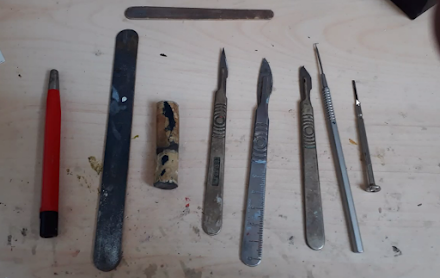 After some further discussion in the group, we moved on to ponder, yet again, our proposed group skill-honing cameo shed layout. Much discussion focused on the desirability, or otherwise, of a turntable. A plan will be finalised before the next meeting hopefully, then work will be allocated to those willing to try their hand at various tasks.

The next meeting will be a call on 14 November with a theme of "your most-useful, and least-useful, tool". This should lead to an interesting series of sheepish admissions of impulse purchases at exhibitions and flea markets!