Jim, Alistair, Stephen, Andy, Gordon, Simon and Graham met at Alisdair's house in sunny Scotstoun for this month's meeting. The Short Talk was by Alisdair himself, on a subject close to his heart as a retired civil engineer: Bridges, and typical features to include when modelling them. He recommended "Bridges for Modellers", L.V. Wood, as a good reference (originally by OPC, reprinted more recently in paperback: check out the usual Internet sites to find a copy).

The talk was illustrated with photos of railway bridges in the Glasgow area. We were shown how iron and steel girder bridges often have a "hog-backed" shape seen from the side, rising from each end to the middle, with characteristic vertical stiffeners to the side of each flanged girder. Among other functions, these stop the girder failing by buckling downwards or outwards. The stiffeners are often wider at the top, and their spacing varies: a long span will have closer stiffeners. Under the bridge, cross-beams in line with the stiffeners prevent shear forces tearing the bridge apart, and in older bridges are often revealed by rivet patterns on the side girders. Steel troughs between the cross-beams allow the track to be ballasted across the bridge; the troughs are often lighter weight when a load such as platforms rather than track is carried. There will be pilasters at the end of the bridge, which provide a structural function on arches but also a practical and aesthetic function on other bridge designs.

We were shown a variety of photos of skew bridges and Alisdair explained the various additional forces these introduce, often in counter-intuitive directions, and the design features required in consequence. We saw examples of bridges replaced during their working lives and the difference this can make to the abutments, for example ashlar masonry being replaced by brick or concrete; and how concrete retaining walls are often given horizontal courses to conceal the cracking which occurs normally - the concrete cracks unobtrusively at the course rather than in full view.

Detailed photos were produced of bridge beams resting on padstones at each abutment: stone padstones on older bridges, concrete in modern. Arch bridges were explained as being basically of circular, elliptical or segmented shapes, with the segmented type in particular requiring substantial amounts of rubble behind the abutments to stop the ends of the arch kicking out. Circular arches are much less demanding. The arches also rest on padstones, with skewbacks (I think) to spread the load outwards. Seen from below, the arch stones typically fit very tightly together, since if they are loose they will move and rub when loaded, and soon fail.

Other stresses try to tear the arch apart sideways, and if this starts cracks, patresses (steel plates) are often applied to each side of the arch connected by rods passing right through the structure to resist these forces. There was much more explanation and many illustrative photographs showing how the various design features were expressed by engineers in the distant and more recent past. The speaker's expert knowledge of these features did not stop the audience from contributing their own views, but Alisdair showed commendable restraint and so we were all satisfied. A most interesting talk which hopefully will lead to more accurate bridges on our layouts. We had no idea Alisdair's professional life had been dominated thus by stress, but it does explain some of his own more unusual design features which have puzzled us in the past.

Simon had some interesting boat kits in card and paper for a Clyde puffer and a small fishing boat from ScaleScenes. These look to be nicely designed as waterline or full-hull versions with excellent instructions. Simon also had questions for us regarding point construction with the Laurie Adams chairplates, which he finds either too tight or too lose to grip the rail. Discussion ensued without conclusions: advice will be sought from the designer.

Jim had his latest footbridge etches for Dunallander for our inspection, and very nice they looked too. He's awaiting arrival of the turned support pillars. 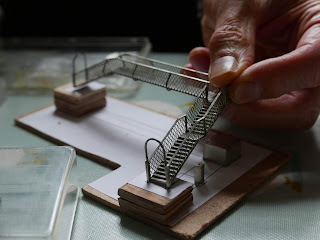 The stair treads are folded up from a single piece of etch, but Jim soldered a flattened fine wire on each one to provide a lip to the steps: the slight relief catches the eye and improves the appearance considerably. The T-section girders of the side supports and hooped entrance arch are surprisingly strong, in spite of being from 10-thou material for the stem of the "T" and 5 thou for the top. The design and build is documented in Jim's RMWeb thread here.

Jim also had his venerable 498 class Caley dock tank for inspection so we could see the recently-fitted pickup skates in action. The photos deliberately use a light background for illustration: in practice on the layout they are not visible. 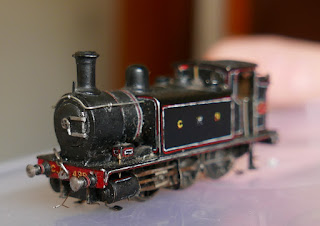 If you look closely you can also see the coil springs in the Alex Jackson couplings.

Jim found it was necessary to shape the support wires for the phosphor-bronze skates carefully, so they do not catch on point crossings. 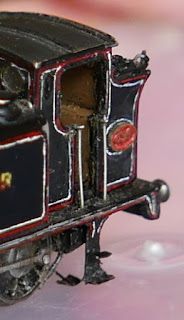 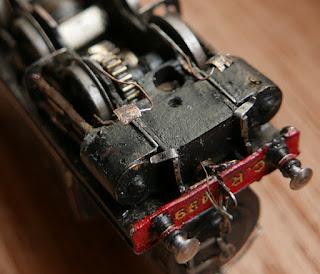 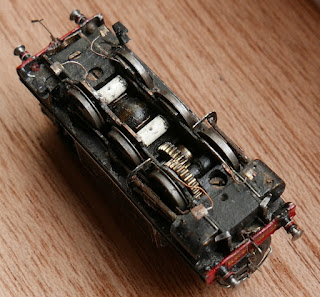 And indeed the "beetle-crusher" did seem to run better.


Alisdair had his erstwhile test plank on display, which has now blossomed into "Aye", a mini-layout based on an imaginary Highland Railway station. (There is bound to be some horrible pun involving the title, so far not revealed to us, and for all I know the spelling is less obvious, in the same way that the village of Avoch - from the Scots gaelic Abhach, "mouth of the stream" - on the Black Isle is pronounced "Och"). The station building, based on Grandtully, was featured in last month's blog. 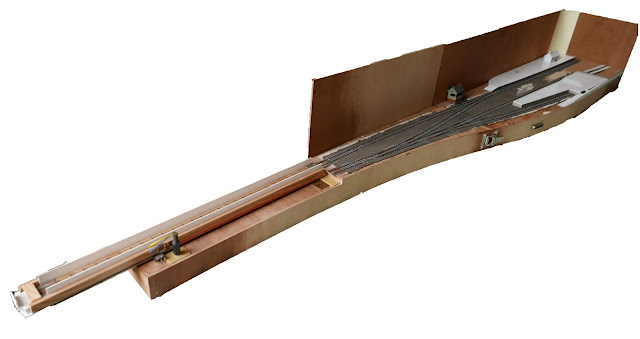 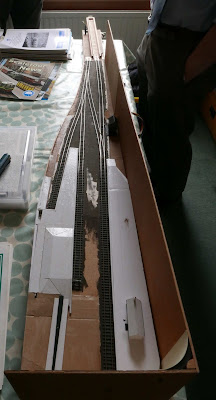 A detail of how the boards are joined using flight-case over-centre clips: 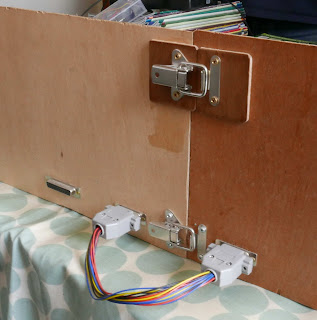 and the spring-loaded sector plate stop: 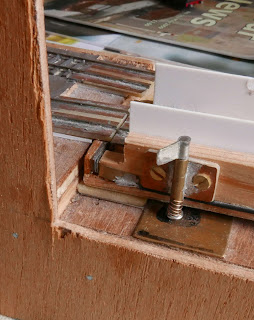 and a view from underneath: 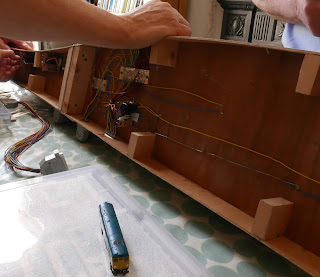 A fault-finding session ensued: a slight kink in the track, hard to spot without assembling the full layout, was the cause of persistent derailments of longer-wheelbase locos. A faulty DPDT switch was also replaced. We will no doubt return to "Aye" in future blogs.

The big news at piece-time was the replacement of bacon, with its attendant smell and mess, by roast ham with cream cheese and tomato in the rolls. Domestic harmony was thus assured and it has to be said that the rolls were fully better than the previous version. A wide variety of fresh baking was also provided. The East Coast elements of the FCAG will have to look to their culinary laurels. This is, of course, all a distraction from serious modelling, but we are easily led astray.

Some discipline was eventually restored and a peaceful scene ensued in the afternoon sunlight: Jim working on preparing the etches (of his own device) for his new loco, which will be a Caley 323 class "Jubilee Tank"; Stephen soldering up the axleboxes he'd spent his dinner money on at Tutbury; Alistair adding a loco servicing road to his Edinburgh layout pipe-dream; Andy browsing the latest magazines; Graham soldering up yet another 2mmSA LNE fishvan chassis; and Alisdair brewing coffee and tea. His flowery pinny is on order. 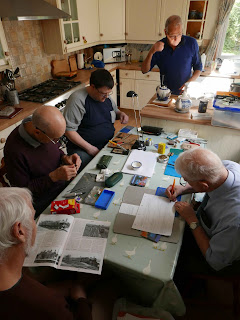 And so the afternoon drew to a close. Our next meeting is proposed to be in Edinburgh, exceptionally on the first Saturday of the month, July 6th.
Posted by tin whistle at 23:23:00