For a change this month, we decided to visit Summerlee Museum of Scottish Industrial Life. Most of us had visited it at some point in the past but it was time to renew our acquaintance.

Summerlee, the site of an ironworks which closed in 1930 and later of a crane factory, is Scotland's principal museum to the iron, steel, and boilermaking industry which first developed in the Monklands area of Lanarkshire, a few miles to the east of Glasgow, which became the town of Coatbridge. The collection includes artefacts from the cast and malleable iron, and steel manufacturing industry, and many of the specialised heavy machine tools developed for boiler manufacture by local firms. There are also several locomotives and a short length of working tramway.

It's a good place to take kids (no surprise we liked it, then) and takes several hours to go round - not quite on the scale of the Beamish museum in County Durham, but full of interest nonetheless, and with a small but capable café on site ("capable", because they offer bacon sandwiches amongst other delights. See April's blog). Plus, unlike Beamish, entry to the museum is free: the whole place is funded by the local North Lanarkshire council. The location is almost completely encircled by rail lines, mostly still very active with Glasgow suburban electric services, and by part of the former Monklands canal system.

Rather than give a blow-by-blow account of what we saw, I'll limit the description to a few snaps of railway interest.

Andy, Alistair, Alisdair, Simon and Graham came for the day out. We had a choice of two adjacent stations to arrive at: Coatbridge Central on the former Caledonian line, where the 1899 station building survives, no longer in railway use: 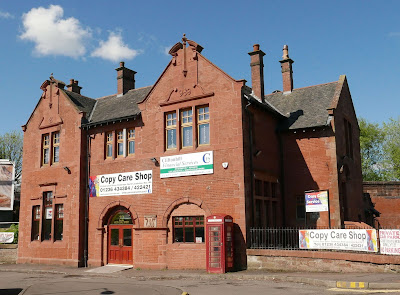 and the deliciously-named Coatbridge Sunnyside, on the North British line to Airdrie, Bathgate and Edinburgh, where the 1888 station building is still very much in use, now even offering a café in the building: 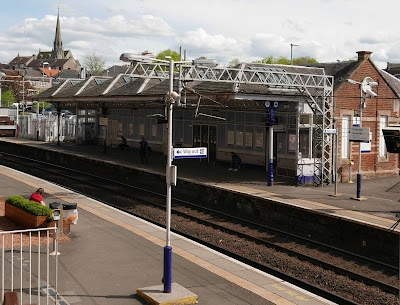 Most of the canal network at this point has been drained, but the bridges remain. Here's the rail bridge crossing the Monklands canal just south of Coatbridge Central, with a footbridge tucked under the main bridge. 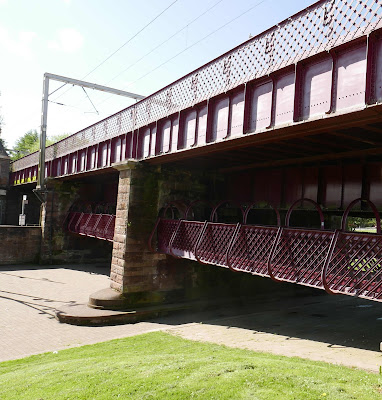 Within the museum there are a couple of railway sidings and a few items of railway interest. Here's the group posing in front of 4-wheel vertical-boilered Sentinel 9628 of 1957, "Robin", which worked at the nearby foundry of R. B. Tennent Ltd. at Whifflet. Tennent's were keen on Sentinels: they bought their first, an ex-demonstrator from the Sentinel factory, in 1953, then purchased "Robin" new four years later, and followed up with two further second-hand purchases in the following year. They worked until 1984: the other three shunters are at the SRPS. Behind "Robin" is an Andrew Barclay 0-4-0 diesel-hydraulic shunter of 1966. 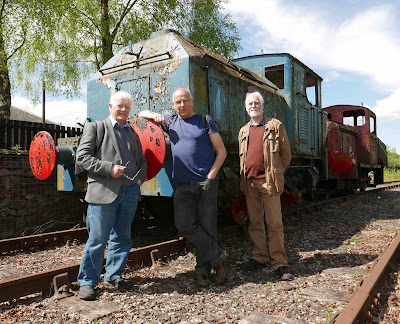 Another exhibit is a South African Railways GMAM Garratt, isolated on a short length of Cape Gauge track, built at North British Loco in the mid-1950s. Like the Sentinel, the Garratt is sorely in need of a touch of paint. I hesitate to criticise the museum on that account however: having been involved in painting three main-line metre-gauge Garratts I'm well aware of how long it takes and what it costs (and sadly, how few years it lasts before it all has to be done again). For all the peeling paint, the GMAM is still an impressive machine. 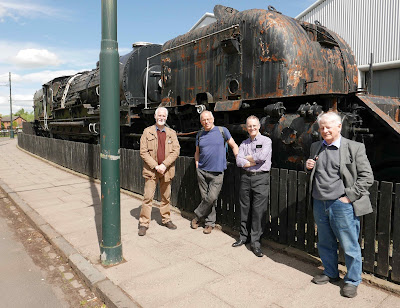 There's also a couple of industrial tank locos which I did not photograph, and two Scottish-built steam rail cranes, including an impressive six-cylinder machine from a local steelworks which could hoist or luff, slew, and travel simultaneously so that the ladles of molten metal were dealt with quickly.

A surviving section of the former rail connection to the crane works gave a chance to see check chairs with the check rail removed: 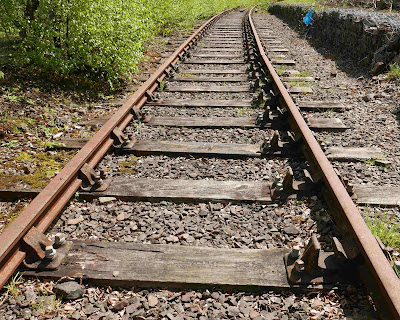 And finally, if you have ever wondered what load to put in a pre-grouping pig iron wagon from the days of non-integrated iron and steel works, here's a Summerlee iron pig from the 1920s. It's about three feet long. These were cast in sand beds on the ironworks floor, fed from a central sprue (the "sow") from which they were later detached, just like a lost-wax casting on a much grander scale. I had visualised pigs as much shorter, squarer objects, so it was instructive to see this. Each pig weighed about 100 lbs so there would be 22 or so to the ton, so I suppose the typical 8T or 10T pig iron wagon would be loaded with around 200 pigs. Pigs were stored crosswise in square stacks while waiting to be loaded.

Next month we will most likely meet in Edinburgh. Probably too much to hope that we'll get another day of sunshine such as we had in Summerlee! 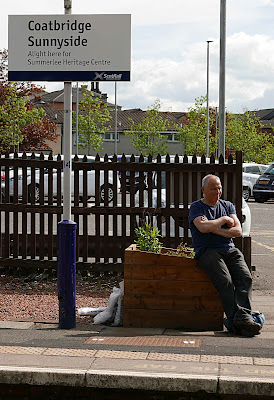