Alisdair, Alistair, Andy, Stephen and Graham met in Edinburgh on a truly dreich day. The plan was to have a running session with Sauchenford, but first Stephen gave us a wee presentation on "Jigs I have known". He moved through these at a fair rate and I didn't get photos of all of them, but here goes.

In the beginning was the plain soldered track jig: 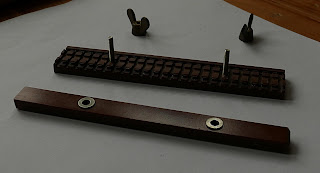 designed for 8'6" paxolin sleepers; the fence at the back of the jig had to be milled narrower to allow 9'0" sleepers to be used. Later designs of this jig have a movable fence to overcome that restriction. 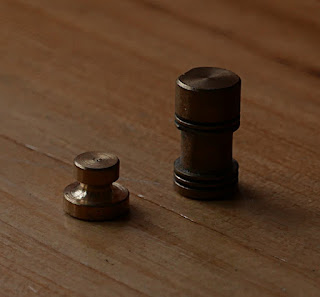 The next jig was a home-made track-straightening and point filing jig: this was said to be written up the old Beginner's Guide, but I have checked mine and it isn't in it! Maybe it was in the 2mmSA magazine. Here is the rail-straightening part. from the days when rail came in a coil. The rail is threaded through a set of three discs and gently pulled through to remove the curve, repeating as necessary until it is as straight as possible : 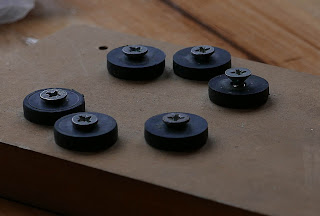 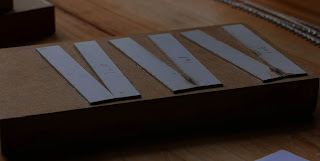 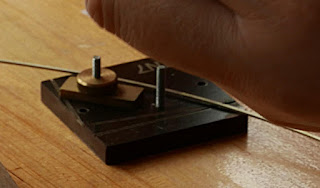 They can be found on the Shop website here under "Construction and Assembly Jigs", along with the associated crossing assembly jigs in milled aluminium.

Next up was a Blackburn track construction jig:

and etches for the Blackburn system, the Cox system, and the Fence Houses system of bullhead chairs were passed round for inspection.

A Bill Rankin-designed point jig was next up: 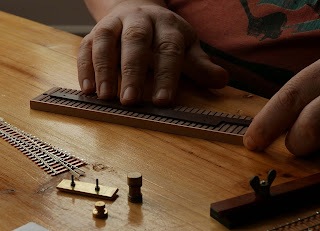 Its inspiration was a requirement to batch-build standard-geometry turnouts for a large fiddle yard. This is on the Shop list as "Turnout Assembly Jig".

A triangular track jig allowing for gauge widening on curves (point into centre of circle to widen gauge) was also shown, but was camera-shy. It's on the Shop list as "Track Gauge Triangular (Brass) Standard Gauge".

The bog-standard back-to-back gauge was shown, on the right here - it has been modified by filing out a chunk so it can be used on a loco axle with a gear. Alternatively the design on the left does the same thing. 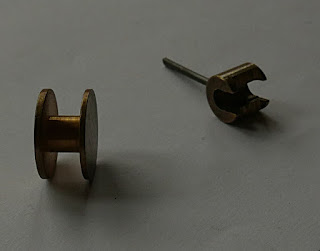 And then there was an unknown jig! acquired from a 2mm modeller changing scales. Anyone know what it is? 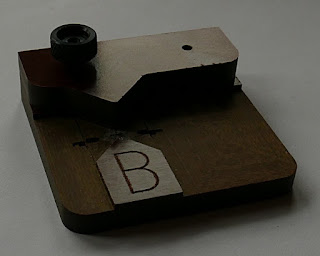 We also had a look at a wheel quartering tool for steam loco chassis construction, at the top in this shot: 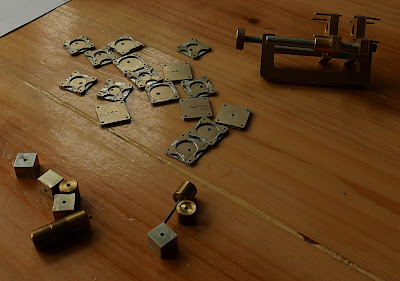 The square objects are plates, built up from several etch layers, to hold the loco wheel with its half-axle and a hole (or slot, to allow different throws) for the crank pin. These hold the wheels at the correct quartering in the jig, which is then tightened to press the axles into the muff precisely square. Not shown are the little shims which are slipped between wheel back and frame to ensure running clearance. I have one of these tools and it works very well.

At the bottom of the same photo is the "loco chassis frame assembly jig", in this case with extra spacers from a Fence Houses chassis to suit its thinner frame material.

Stephen ended at that point and we had lunch, then put Sauchenford up for a running session. Alisdair has finished installing the Laurie Adams point rodding and it does make a significant difference to the look of the layout. Unfortunately only the operators really get the benefit of the view! 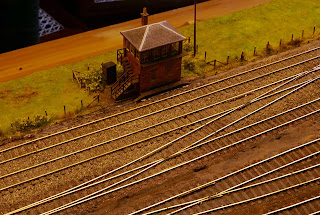 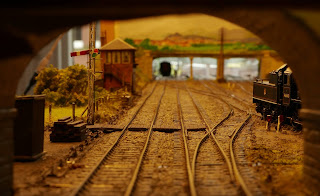 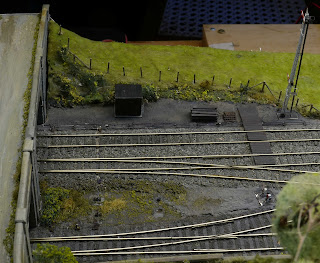 The main observation is that it is challenging to retro-fit rodding to a layout, and much better to plan it at the construction stage. It is also very difficult to colour where it is in contact with ballast, without marking the ballast too. Again, better done before ballasting.

With the running over and done with, we had a discussion on how to make the layout more interesting and convenient to operate, finally deciding that we could simplify the design of the fiddle yard boards to reduce the number of moving parts and track joints. We also allocated tasks for the 2mmSA Scottish Supermeet in Perth on April 21st .... mark your diary now!

The rain had eased off at last so we headed off home. The next FCAG meeting is on 14 April at a location to be announced.
Posted by tin whistle at 10:14:00