Simon, Jim, Stephen, Alistair and Graham met at Alisdair's house in Glasgow on a cold but bright day. Some of the keener group members had found time to advance their projects in the last month. Simon had worked on some Severn Models etches to good effect: a signalbox in a fetching shade of pinkish primer: 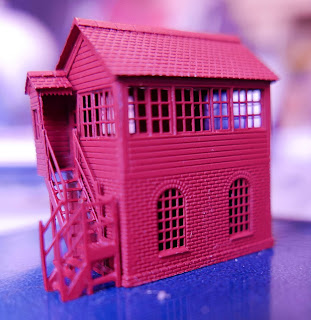 and a weighbridge and office: 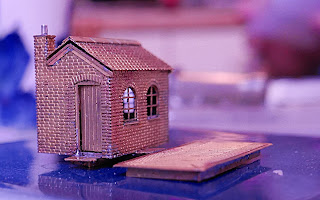 Both were made up just for fun, with no particular plan to use them in a model.

Stephen had a Dave Bradwell J27 etch resurrected from his Round Tuit box of stalled projects ... it sits on a Bob Jones chassis which was too shy for a photo: 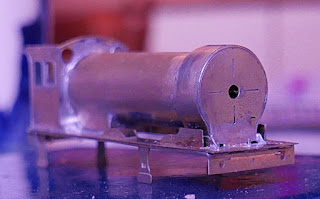 Jim's signalbox for Kirkallanmuir was shown in flat form in last month's thrilling blog entry. This month we got to see it in built-up form : 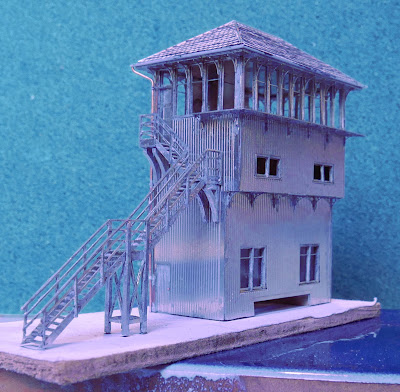 and some of the interior detailing: the train register desk and chair: 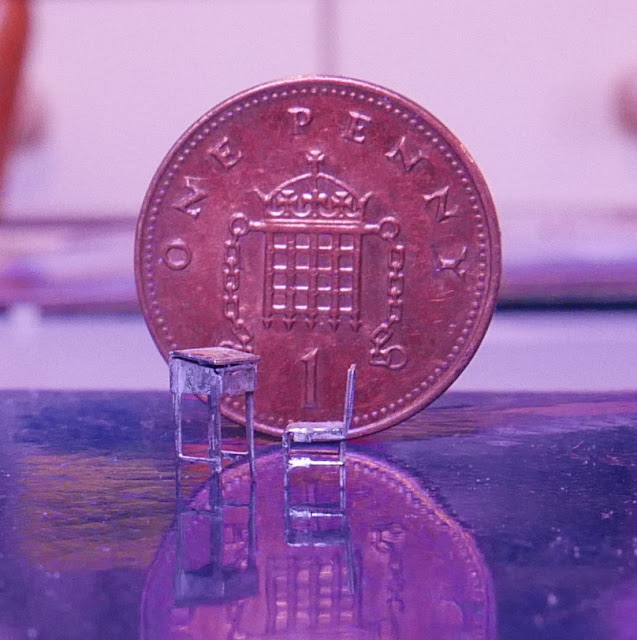 Took him ages to make the overscale penny though.
The cunning jig to assemble the treads of the access stair was also on show. Here's a view from each side:

The stair treads are individually etched pieces with small tabs at each end. The slots along the bottom of the jig accept the treads, and are differently-sized: the width of the tab on one side, and the full tread width on the other. The distance between the sides of the jig is slightly less than the tread length.


The treads are fed in through the larger slots so that a tab locates in the smaller slot on the other side. The tab at the other end stands slightly proud of the jig. The treads are thus held firmly while a pre-assembled etch for the stringer with slots to receive the tread tabs and handrails attached is offered up, the treads teased into the slots, then soldered with the merest trace of solder paint and a quick dab of the iron. The assembly is gently extracted and placed in the open slots at the top of the jig, and the stringer and rails for the other side of the steps is soldered up in turn. Clever stuff, and the result is worth the trouble.

Time was pressing however so the models were tidied away and Alistair gave us a short treatise on creating a backscene. Larger scales, he told us, may be able to get away without a backscene in some cases, but in 2mm it is essential. It has to be removable so that it can be worked on easily if necessary. Some notions on how to arrange this were sketched out for us: 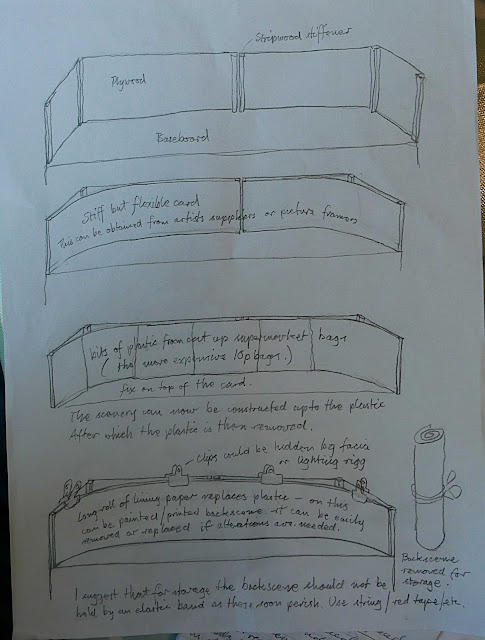 As for what material to us: decorator's lining paper seems promising but in practice absorbs large quantities of water and expands as it does so, making dimensional stability a problem. Artists customarily prepare paper by stretching it on a board (soaking it, wiping off the excess, then taping it firmly down to the board while at maximum state of expansion and leaving it to dry overnight) but this is impractical for very long strips of paper. Thick watercolour paper will not expand as much but is too expensive to use for large backscenes. Instead, thin white card (from an artists' supplier or even framer's offcuts), carefully butt-jointed with reinforcing strips glued behind was recommended, with white emulsion as a base coat and used to fill any tiny joint gaps by careful use of a spatula.

Artists' acrylic paint is Alistair's preferred medium, giving good colour depth and being easy to use if care is taken to prevent them drying out on the brush. No need to buy expensive individual tubes of artists' acrylic: the inexpensive sets available in WH Smith such as Windsor & Newton "Galena" or Daler-Rowney System 3 are perfectly adequate, with a good range of useful colours, and tube sizes more suited to 2mm work. The cheaper paint contains more filler and less pigment - which makes their colours less intense - but for backscene use, intensity is not the main consideration. It's worth buying a larger tube of white, since it will be used four times as much as the other colours. Dark colours tend all to look similar since they are close in tone. To achieve a clear differentiation, lighter tones work better.

The first question was how to deal with sky. Alistair showed us how to mix white with cerulian blue and a tiny touch of ultramarine to get a convincing shade. A grey sky is achieved by adding a touch of burnt sienna. Sky tone is lighter where it meets the horizon and deeper straight overhead. Work with a wide, flat brush to cover the paper quickly: keep water handy because the acrylic will dry our on the brush very rapidly.

Deep blues from different suppliers may not act the same way when diluted and spread out over an area - some may have a reddish tint; others greenish.

Like all water-based paints, acrylics' shade lightens slightly as the paint dries, so it is necessary to work slightly darker than the desired end result. The change is not very marked in acrylics and is really only an issue when trying to match an existing tone of dry paint on scenery. (Acrylics' use is of course  not restricted to backscenes: Jim told us how he now uses them exclusively for wagon lettering). An old trick is to hide the backscene/scenery join with a wall or trees.


Some colours are essential in the backscene artist's palette: white, and a dark and light yellow, red and blue respectively. Alistair mentioned titanium white, lemon yellow, cadmium yellow, cadmium red, alizarin crimson, ultramarine blue and cerulean blue. Some other harder-to-mix colours are convenient to have at hand: yellow ochre (especially for mixing to create grassy shades), burnt sienna, and a yellowish or bluish green.

For detail, a "rigger" brush, with long bristles to hold a decent load of paint, is a good choice. The name apparently derives from artists depicting the rigging of nineteenth-century ships. 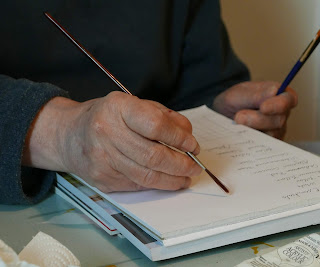 The backscene should not impose itself. Detail should be minimal and tones muted - as exemplified by models such as Anthony Yeates' "Corrieshalloch" and taken even further in the monotone background of "Lighterman's Yard". True perspective often looks wrong in a backscene, since it can only be accurate from one viewpoint. Instead, parallel perspective is a better choice: not completely correct from any viewpoint, but adequately convincing from most.

A very useful talk - thanks Alistair. The bacon sandwiches were served up, the scones and mince pies were handed round. All disappeared quickly. Then some more detailing work was done on "Sauchenford" - adding the characteristic A-frame telegraph poles used on the main pole routes of the Caledonian Railway. These were made up by Alisdair from kebab skewers shaped to a taper in a minidrill using coarse sandpaper, with crossbars from Jim's etches:

It's interesting how much character it adds to a scene to have some tall verticals - telegraph poles and signals - alongside the railway.

I am always fascinated to see other modellers' toolboxes: here's a shot of Jim's travelling kit to close with, in a sturdy wooden box which apparently once held rolls of camera film. 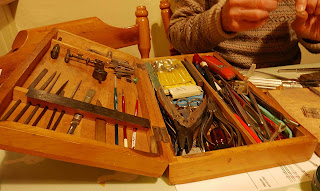 Next month's meeting will be in Edinburgh, on January 13th. For a change, the talk will be about the prototype rather than modelling, specifically on the Kenyan metre gauge, and the revival of a 1920s Vulcan Foundry 4-8-0. New attendees are welcome, just let Alisdair know you're coming.
Posted by tin whistle at 22:40:00