For our August meeting we abandoned our usual alternating meeting venues of Edinburgh and Glasgow, and drove through the light drizzle to Biggar in South Lanarkshire, whose 2300 souls punch above their weight in terms of preserved gas works, vintage vehicle festivals, proper butchers and bakers (very possibly also candlestick-makers), and so on. Just about the first thing you learn from its Wikipedia entry is that it was served by the Caledonian Railway. The perfect place, then, for a 2mm area group meeting.

Our destination was Jim Watt's double garage, where we were promised not just space to erect Sauchenford, but the chance to check on the progress of Jim's Kirkallanmuir project, which he has chronicled from time to time in the 2mmSA magazine, starting in the June 2011 issue.

First, then, Sauchenford. The scenic section, cassette fiddle yards, and support substructure had been brought from their three separate storage locations, and the aim of the day was to change the layout height by shortening the legs to give our preferred track-height-above-floor dimension of 3'9".

The first job was to erect the substructure with its existing legs upside-down, using the cassette fiddle yards as supports. (And we wonder why the track on them gets damaged!) 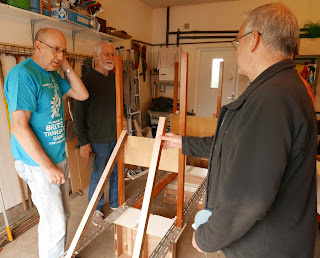 New support struts were marked and drilled, then the legs were carefully measured three times, checked twice, and cut once. 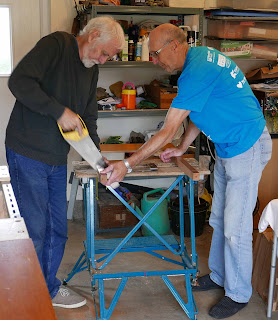 In spite of this, we managed to cut one of the legs half a centimetre shorter than the others. We may shortly be ordering levelling feet from that nice Mr Sissling in Bradford ... at any rate, the substructure in all its splendour could now be erected the right way up: 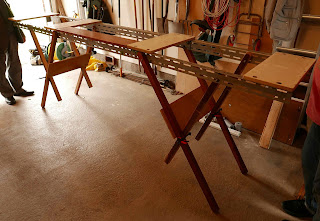 and the layout popped on top, with its new lighting installed. By this time we were full of excellent home-made tomato soup and proper breakfast rolls with copious quantities of bacon from the aforementioned bakers and butchers. The proud parents thus adopted expressions of dreamy contentment, and a wee running session ensued. 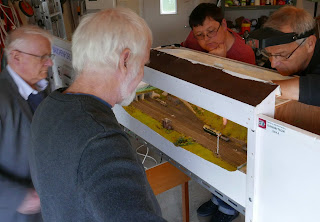 Of course what we had really come to see was Kirkallanmuir, Jim's essay on the mineral railways of South Lanarkshire, which is now essentially in working order and ready for scenic treatment and buildings. The following pictures were taken in available light without a tripod so perhaps don't really do justice to Jim's work, but hopefully they give a flavour. Click on the photos for an enlarged view.

Kirkallanmuir's back story is a single-line country branch of the Caledonian Railway. Originally a terminus, the line was doubled after coal mining began nearby, and was extended on into the wilds of South Lanarkshire as a single line. A new through passenger station has recently been built, the old terminus becoming the goods station; a mineral railway connects nearby collieries to the weighbridge at Kirkallanmuir; and a small storage yard is provided for weighed full loads and empties waiting to go up the branch. A cattle bank and agricultural warehouse bear witness to the farmland surrounding the colliery screens and slag heaps. There is no engine shed, but a small turntable allows tender locos to work terminating trains. The whole thing is on three one-metre baseboards, with the double line, mineral branch, and new passenger station represented by cassette storage yards, and the old station, turntable, and wagon yard fully visible in front of these.

Here is the empire with the emperor: 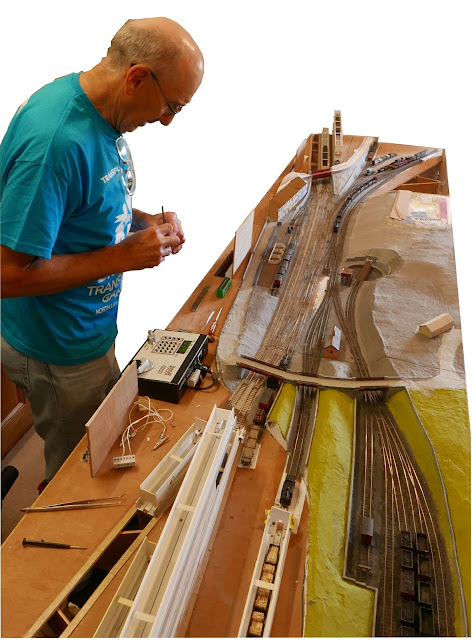 On the board closest the camera, the double-track line from Bonkle is on the left foreground; the colliery branch is in the middle; and the storage yard is on the right, on the viewing side of the layout. The cattle bank and warehouse form the backdrop of the middle baseboard, with the turntable next the viewing side: the mockup card hut marks the site for the Kirk of Allanmuir (to be modelled on Jim's local church). Finally on the left side of third board, the ends of the passenger platforms are just visible through the bridge forming the scenic break as the line theoretically carrying on to Wilsontown, while the goods station is to the right, next the viewing side.

Here's the view from the other end. The ballast colour differs between the yards and sidings, and the more carefully maintained running lines, which are also modelled slightly higher by packing the track with thin card. 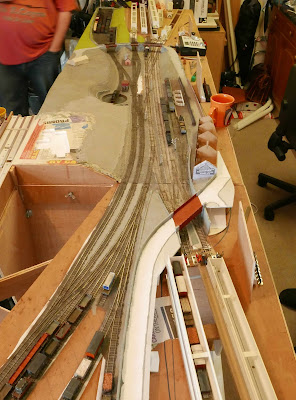 The goods station yard has yet to gain its shed and loading banks, but is already full of stock. 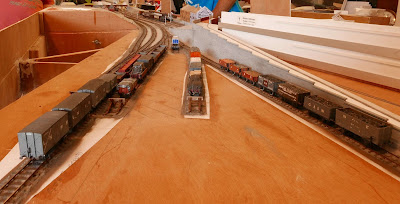 The agricultural store in the next shot is a second incarnation of the model Jim made as part of the Group's cameo challenge, written up in the magazine earlier this year. Jim went ahead with his intention to use laser-cut 1mm MDF for this structure, in order to get crisper cuts for windows and doors. The results justify the effort. No doubt Jim will report on this himself in due course.

The central board has some attractive views of trains as five threads of activity take place: occasional shunts to the cattle bank sidings at the rear; passenger trains moving through the scene adjacent to them; constant movement over the goods station throat immediately in front, as the yard pilot sorts wagons; colliery traffic arriving over the weighs, then reversing to the storage sidings (or, alternatively, full loads being drawn out from storage by a pilot then reversed to depart behind a train engine towards Bonkle); and finally, closest to the front, the turntable. In this picture, a passenger train arriving from Bonkle waits for the signal to enter the station. 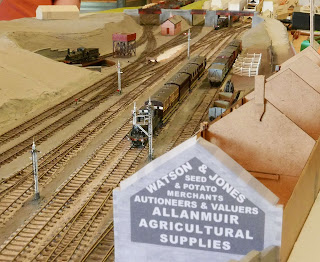 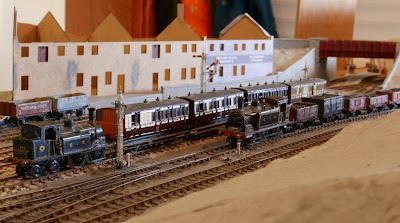 The signalbox will be on a restricted site opposite the water tank, and so will be an oversailing design. 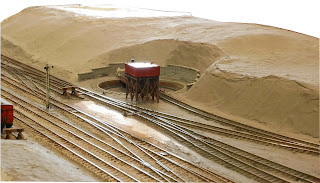 Jim's 0-4-2 tender loco No 319 emerging from the turntable road. To the left is the weighbridge hut. 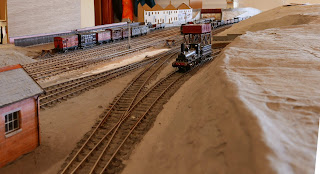 Finally some views of the third board. The road to the station is carried over the various railway lines by light plate-girder bridges modelled on surviving CR structures in South Lanarkshire. Here's one of them, spanning a tandem turnout with loose-heel switches and typically rough yard track.

The storage sidings are almost full. 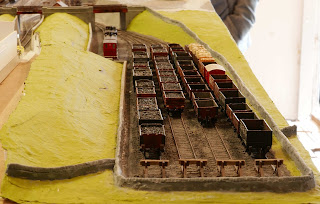 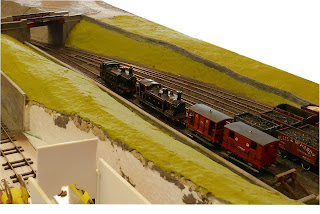 Jim's method is to bring together elements from observed Caledonian practice rather than slavishly model particular structures or layouts, so that the goods station has traces of Blairgowrie in its pedigree, the passenger station of Strathaven, the signalbox will be inspired by Strathclyde Junction, and so on.

Kirkallanmuir, seven years in gestation, was delayed by an extended house move saga, but activity is once more in full gear. We look forward to seeing the layout again once scenics have progressed further.

Alisdair, over the last month, had assembled some of Laurie Adams' point rod stools etches for Sauchenford. He asked me to take some pictures, but in honesty I could hardly see them, never mind photograph them! Here they are anyway:

Fortified by yet more tea and coffee, we packed up Sauchenford and headed back to our respective homes through late afternoon sunshine, with many thanks to Jim for his hospitality and for the peek at Kirkallanmuir.