The first meeting of the New Year saw us back on the west coast. Alisdair hosted and Alistair, Andy, Anthony, Stephen, Simon, and Graham drank his tea and coffee and ate his bacon rolls and cakes.

Some modelling was done as well however, around the kitchen table in best Area Group tradition.. 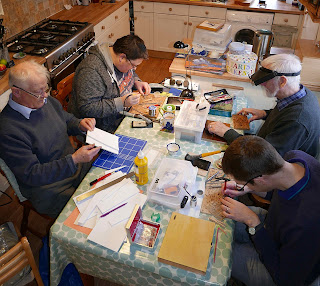 For most the focus was on the 2016 Challenge: produce a diorama on a 20cm x 16cm base with, at minimum, some trackwork to 2mmSA standards - an opportunity to try out new techniques, or an excuse to model something different from a main project.

Jim was absent this time, but nonetheless we felt his presence in the room because of his latest status report on his goods yard scene on RMWeb, which he'd followed up with a few stern e-mails telling the rest of us to get our fingers out. So who obeyed?

Alisdair has built a cameo inspired by the 3' gauge Upper Works Railway in Lochaber, which linked the British Aluminium Company works near Fort William to its extensive hydro-electric schemes at Loch Trieg and Loch Laggan, and serviced the tunnels, valve shafts and pipelines along the way. It's not complete, but already looks impressive.

As a civil engineer he identifies with the subject, which he discovered hill-walking in the 1970s; presuming the railway to be defunct, he crossed a burn using one of its spindly, handrail-less bridges, and was mildly startled when a train rattled past him on its way downhill a few minutes later. 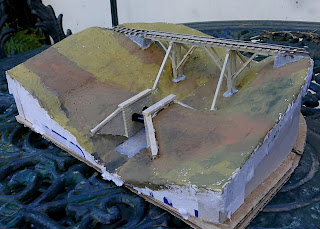 He has modelled a scene with twin pipelines crossing a small burn, and the 3' line on a timber bridge behind. 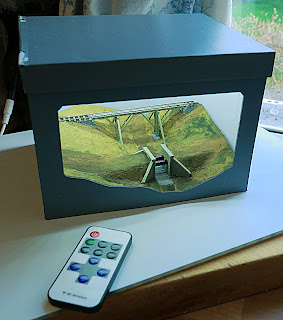 A cardboard box was adapted to become a proscenium arch and lighting unit - the latter using LED strips and a remote control (whit!) to vary their intensity. 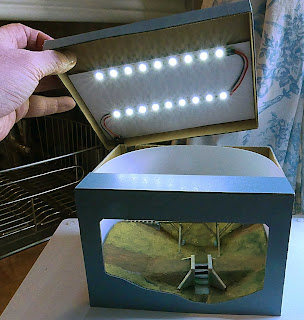 As usual Alisdair's structures look the part: the stonework of the culvert where the pipelines are exposed is subtly convincing. The poor colour balance in my photos doesn't do justice to the model. 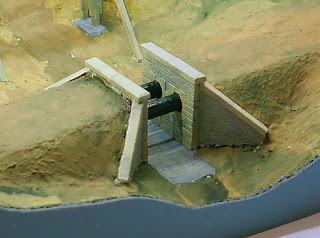 Simon has killed two birds with one stone: his father Russ modelled an N gauge station building over 40 years ago and, for his 80th birthday, Simon decided to place it in a suitable context for display. So his diorama is an island platform with a retaining wall as a backscene.

Even with the building loosely placed on the platform it looks at home. 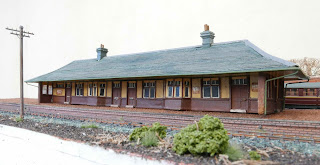 The scene is named "Dalmally" ... which will have a few people scratching their heads, since Dalmally is on the Callander and Oban and has a two-storey stone station building, whereas this specimen is clearly a typical West Highland Railway design. The explanation is that the building originally graced an N gauge layout inspired by the idea of a West Highland branch to Tarbert (Loch Fyne), with an intermediate station at Dalmally. So there ... Rule 1 applies. 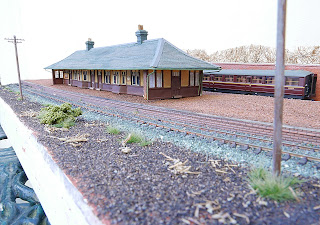 And for those of you reaching for a tape measure, yes, it is not strictly 16cm x 20cm. There are exceptions for 80th birthdays, and anyway the building is longer than 20cm on its own!

Andy has spent most of his time building a bathroom and kitchen in 1:1 scale recently, but had brought wood and Easitrac. With domestic tasks out of sight and mind, he finally started his diorama: 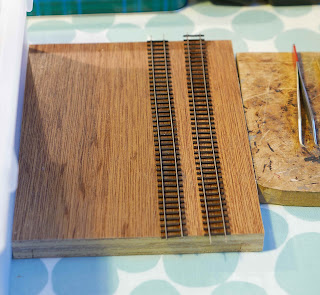 Alistair progressed his model of a railway scene with low-relief tenement backscene: 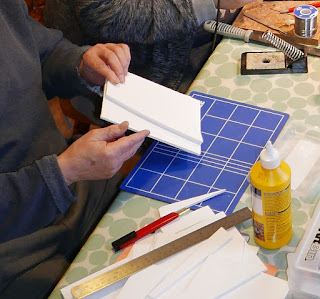 Anthony, visiting his old FCAG haunts after (we assume) getting a special day pass from the NEAG, was working on a coach bogie. 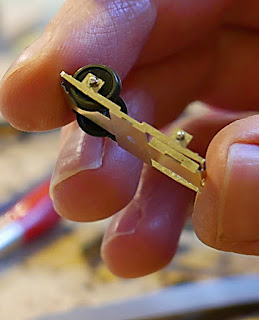 He also had a nice box of his own stock with him. At the top, two open wagons from Jim Watt's Buchanan Kits etches; below, his own scratchbuilt Highland Railway brake van and open wagons, plus a Highland 6-wheel composite and a double-deck sheep van, both from his own etches.

The coach is worth a closer look: it is built up from four (or was it five?) layers of etch. Anthony admits to chosing a prototype with absolutely no tumblehome, which simplified matters a little. The centre axle simply slides in inside bearings; there are no Cleminson trucks. All very nice. 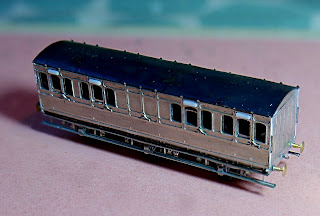 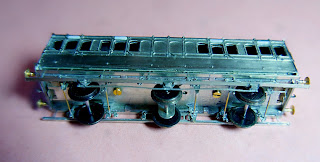 Stephen was working on a buffer-stop for his diorama. Fired with enthusiasm from the meeting, he continued to work on the trackbed once back home, and sent this photo (from which we can deduce his scene will have two track levels). Whether voodoo or acupuncture is involved is not known, but it seems to work for Stephen. 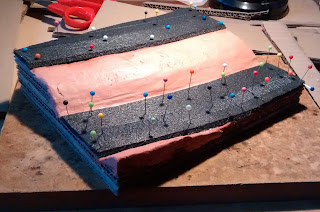 My progress was a little less spectacular, but I did make a start on soldering up some of the windows for the GNSR loco shed at Macduff which will be my challenge entry. Jim Watt very kindly drew up and etched these for me: they fold up in a "Z" ...

with the centre part spacing the two sets of astragals apart, so that a piece of glazing material can be slipped in between the layers.

So John Knox Jim's fiery sermons to the FCAG congregation seem to have had some effect, and even the greatest sinners (who are mysteriously all from the East Coast) have started on the long road to redemption. Only four weeks now to the deadline!
Posted by tin whistle at 22:44:00